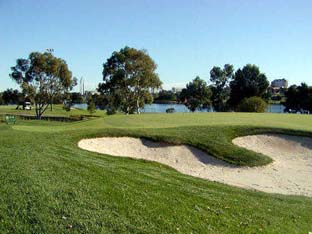 Western Australia's oldest public golf course, which attracted 80,000 different golfers a year, closed in July 2013 and by 2018 will be covered by Perth's new sports stadium and a new luxury hotel.

And unlike other recent stadium developments in Australia, such as Melbourne's AAMI Park where those affected by the development were catered for, those who played at the Burswood Park Golf Course have been left to fend for themselves.

The development also highlighted a trend identified by Australasian Leisure Management Editor Karen Sweaney in her feature 'Parks Under Pressure' in the January/February 2014 issue of the magazine.

In the feature, Sweaney reveals how parks and open spaces in Australian cities are under increasing commercial and development pressure, citing examples such as Melbourne's historic Royal Park is set to lose 6% of its parkland for the city's new East-West Link toll road.

Sweaney also reports that, in October last year, a study by the NSW Government's Department of Local Government found that there had been an 18% reduction in Council owned public space in the past decade, a loss of nearly 27,500 hectares.

Sweaney also highlighted the value of public parks, referring to the Parks Forum's 2008 research paper 'The Value of Parks', which stated "the economic values of parks are not well understood in the wider community. Their importance in the provision of a range of ecosystem services, providing employment, enhancing property values, reducing population health costs, supporting the recreation industry, and in particular underpinning the tourism industry, cannot be overstated."

More recently, Sweaney's concerns have been echoed by a group of Melbourne-based researchers.

Writing in Architecture & Design, Nicholas Williams and Stephen Livesley of University of Melbourne and Andrew Coutts of Monash University suggest that Australia's cities need more trees and water, not less, to stay liveable. The trio believe that urban landscape has more than an economic value but is essential to the liveability of cities.

"As such, this greenery collectively termed 'urban green infrastructure' confers a wealth of environmental, economic and health benefits to city residents.

"By actively cooling the urban landscape, it helps reduce energy use and carbon dioxide emissions, and ultimately lessens the risk of residents suffering heat stress, heatstroke or even death."

The trio go on to state "as one of the most urbanised countries in the world, Australia could benefit greatly from increasing the extent and quality of its urban green infrastructure."