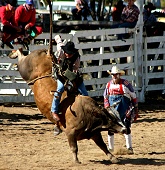 Featuring two days of high level rodeo competition and entertainment, the North Queensland event attracted more than 300 competitors vying for prizes totalling more than $40,000. One of the feature events was the interstate challenge between Queensland and New South Wales, which was won by Queensland for the fourth year in a row.

Mareeba Rodeo Vice-President Darryl Chaplain told The Cairns Post that said the warm weather made for big crowds stating "it was excellent, a great roll up, the stands were full and everyone had a great time.

"There were people from all over the country here, all states were represented and we had local and visiting cowboys competing."

The horse stamped on Russell's face and body several times, fracturing his eye socket and jaw.

All riders sign a waiver before competing in the Mareeba Rodeo.

Last year more than 13,000 people attended the rodeo and while official numbers for the 2012 event have yet to be released organisers said they expected a similar figure for this year.

For more information go to www.mareebarodeo.com.au