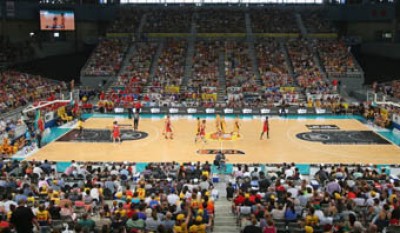 The Australian National Basketball League (NBL) is on track to record its third successive year of attendance growth on the back of a string of sell-out crowds at iiNet NBL Championship matches in recent weeks and what will be a season-high crowd tonight (Friday 19th January) at the Sydney Entertainment Centre.

The Sydney Kings are guaranteed to record their largest crowd of the season with more than 6,000 tickets pre-sold to see their clash with the Perth Wildcats. Club officials have advised that demand remains strong this morning and are confidently predicting a crowd of between 8,500 and 9,000 when the game tips-off.

A crowd of that magnitude would easily surpass the largest crowd so far this season in the iiNet NBL Championship - 6,900 set by the New Zealand Breakers for their home game against the Kings at Vector Arena in Round Four. The Kings' previous largest crowd this season was 6,165 set in Round 13 against the Adelaide 36ers.

Crowds have generally been on the rise in the iiNet NBL Championship in recent weeks, and last night the Breakers enjoyed their third successive sell-out game at Auckland's North Shore Events Centre as they recorded a 91-77 win over the Melbourne Tigers.

The Breakers are averaging home crowds of 3,975 this season, which is by far the highest in the club's history. Their previous best season attendance average was last season when they won their maiden title, averaging 2,994 people per game (including playoffs).

The Tigers themselves have also been enjoying strong support this season from fans, with the State Netball Hockey Centre (AKA 'The Cage') recording its fifth sell-out crowd of the season last round for Melbourne's clash with Gold Coast. The Tigers have thus far seen their crowds rise by 5% over last season, from an average of 3,145 in 2010/11 to 3,304 in 2011/12.

Three out of the NBL's five matches last round were sell-outs, with New Zealand and Perth joining Melbourne in recording capacity crowds at their venues. There have been 10 sell-out crowds in the NBL since Round 11.

League-wide, attendance is up by approximately one percent this season, from 4,031 in 2010/11 to 4,064 through the end of Round 15. That figure, whilst only a modest increase, is quite likely to rise in coming weeks, with the Kings game tonight set to provide a massive boost.

The NBL has also experienced growth in other areas of its business as well, with unique visitors to its website up 20% this season and internet traffic overall up 70% since 2009/10.