Budget Boost for Sport and Recreation but ‘Opportunity Lost’ for Tourism 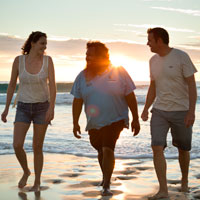 The Federal Budget will deliver the biggest cash injection to sport in Australian history, with $325 million allocated to not only elite athletes but also to grassroots activity.

In a budget that aims to reduce Australia’s surplus three years ahead of forecast, Treasurer Wayne Swan’s allocation to sport includes $237 million for elite athletes and $71 million for community sport.

This morning, Australian Olympic Committee President, who had campaigned against the Crawford Report recommendations to shift sports funding away from the elite and into participation, welcomed the funding, stating “I am delighted the Rudd Government has acknowledged the importance of sport to all Australians … this will assist both the elite athletes and grassroots sport.

“It is not as much as we asked for but these are very tough economic times and our sports now need to collaborate and work smarter to save costs as they prepare for London.”

Coates believes the new funding will ensure the Australian Olympic Team going to London will be able to compete on an equal footing and prevent top coaches from being poached by overseas countries offering bigger salaries.

In its Budget documents, the Department of Health referred to aiming “to increase participation in physical and active recreational activities, to promote physical and mental health, and to help prevent chronic diseases in the community.

“Through targeted investment, international cooperation and advocacy and close liaison with stakeholders, the Government will improve opportunities for participation in community sport and recreation and support our high performing athletes.

“From 2010-11, the Australian Government will introduce a new strategic direction and an integrated whole-of-sport approach to the Australian sport system. This incorporates the initiatives announced in ‘Australian Sport: the Pathway to Success’, which includes the Government’s response to the Independent Sport Panel report. This will support the development of the Australian sport system in three key areas; increasing the numbers of Australians participating in sport for the benefit of our community; strengthening the sporting pathways linking ‘grass roots’ and high performance sport to ensure sustained participation through a strengthened development pathway; and ensuring that Australia continues to excel in international sporting competition.

The Government will invest $5.5 million over four years to implement and operate the National Tourism Accreditation Framework (NTAF) to strengthen Australia's tourism industry.

However, peak national body, Tourism & Transport Forum (TTF) has expressed concern at the Budget’s failure to maintain Tourism Australia’s current funding levels, stating that a “golden opportunity to capitalise on Australia’s tourism’s strengths has been lost.”

TTF Managing Director Christopher Brown said industry would be disappointed that Tourism Australia would not have its full budget available to support its new tourism campaign There’s Nothing Like Australia.

The Government will invest $17.7 million over four years for the National Historic Sites program, as well as an extra $3.1 million in 2010–11 to address safety issues along the Kokoda Track.

Minister for Environment Protection, Heritage and the Arts, Peter Garrett explained that “this new investment in the Kokoda Track includes the complete upgrade of the Owers Corner Road to all-weather gravel, safety enhancements at the Kokoda airstrip and improvements in radio communication.”

This funding is in addition to the $1.8 million announced in September 2009, and builds on the $14.9 million already provided to protect the Track and improve the lives of communities along it. This brings Australian Government investment in the Kokoda initiative to more than $19.8 million over four years.

The Government will also invest more than $8 million in an education and public programs facility for the Australian National Maritime Museum at Darling Harbour, and $7 million for an extension to the National Museum of Australia’s main building, to open up space for more exhibitions.

In training, the Budget is promising $660 million worth of new spending on training to address skills shortages in the economy.

The four-year package attempts to address business concerns about shortages of skilled workers. For trades with the biggest shortages, the Government has put aside $200 million to pay for 39,000 extra training places through a Critical Skills Investment fund. Another $80 million will fund 22,500 extra apprenticeships, with the Government identifying resources, construction and infrastructure as its highest priority industries.