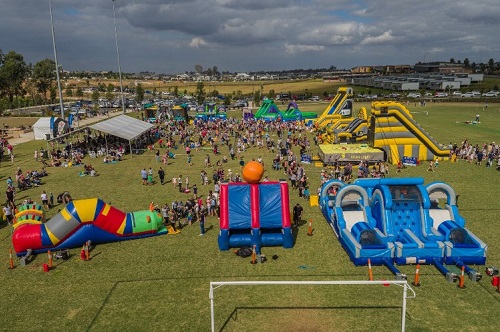 With Oran Park’s population growing from 85 to 7,500 in the last eight years as a consequence of Sydney’s housing boom, Camden Council is encountering the challenges faced by many councils - particularly in the city’s north west and south west - of providing services for these fast growing communities.

With the former Oran Park Raceway now under the Council's jurisdiction - car and motor cycle racing having ceased in 2010 when the NSW Government acquired the site for housing - when setting out to provide a community event in the school holiday they sought the help of one of Sydney's largest mobile inflatable operators, Bubbling With Energy Entertainment.

The Ingleburn-based company then went on to create the ‘Tumble Town’ - which included giant water slides, jumping castles, a Stunt Jump and large inflatable obstacle courses.

Commenting on the event, Bubbling With Energy Entertainment Chief Executive, Mark Rubiolo stated “we seem to be the ‘go to’ company for events which are slightly different to the normal fete or festival.

“With inflatable play so popular now, and the inflatables we use having so much play value, we can turn up at any park in any new suburb, and within hours create a day that families will talk about for months." 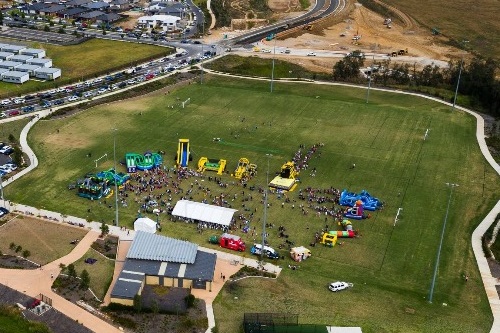 Rubiolo sees that the Ninja Warrior series on Channel Nine has also created huge interest in fun, challenging and safe play, which makes inflatable courses attractive to families and councils.

He sees that an added bonus of mobile inflatables is that they are rolled up and gone by the close of the event day meaning that local parks and event space in new suburbs are being used efficiently until new services accommodating the demand from residents are taken up.

Rubiolo added "we have the ability to create an experience for families in these new areas according their targeted ages, the weather conditions, and the play area we are using.

“This allows local government to simply promote the event on their website. On the day it is really an ‘if you build it they will come’ type scenario. You can literally see people leaving their houses because they can see or hear activity down the road, or someone posts on social media, and it is suddenly shared.”

Bubbling With Energy works closely with councils and sporting groups with Rubiolo highlighting how summer is the ideal time for an inflatable water park set up.

He concludes “like the Oran Park experience, this is where we erect inflatable water slides that are up to three storeys high, water obstacles, mechanical surfboards, and dunk tanks all over the park.

“We can also add pony rides, petting farms, and roaming entertainers which all add fun and colour to any event.

“Councils, clubs with underutilised auditoriums, and local community organisations are all using inflatable play to bring these new locals out of their houses and into the community. It’s a win for the local community, small businesses, and provides a breathing space for local government.”