Queenslanders were encouraged to get close to some of Australia’s rarest animals in the lead up to Threatened Species Day on Monday 7th September.

Dr Miles explained “it’s not every day you have to share the Queen Street Mall with a dingo or a crocodile but these animals are increasingly having to share their habitat with us.

“One way we can ensure native wildlife continues to have habitat, as development continues, is working with trusts and private landholders to protect the areas these creatures call home.”

During the course of 2015, the Queensland Government had entered into seven voluntary partnerships with dedicated conservationists on private land since coming to office.

Dr Miles stated “we’ve worked in partnership with many private landholders to secure or expand nature refuges as part of our long-term goal of ensuring that 17% of Queensland is protected.

The Queensland Government has also partnered with Dreamworld on the Gold Coast to coordinate a captive breeding program, with the hope of reintroducing more bilbies into Currawinya National Park.

Dr Miles added “the greater bilby once ranged over most of mainland Australia, but is now found at only a few locations.

“The Dreamworld breeding program is a collaborative approach to save this rare and endangered species.

“It will also supplement the government’s feral animal control programs in national parks.

“The Department of Environment and Heritage Protection has been working with the Queensland Murray-Darling Committee to use English Springer spaniels ‘Sophie’ and ‘Rocky’ to sniff out feral cats at the Currawinya enclosure.

“Protecting Queensland’s biodiversity cannot be left to the government alone, and partnerships like these play a vital role in preserving our unique flora and fauna for future generations.” 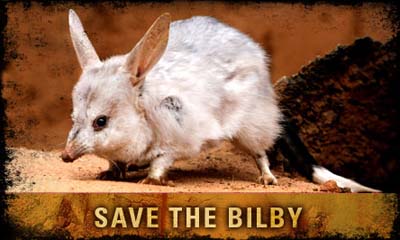 Nature refuges are established as voluntary agreements with landholders on suitable properties.