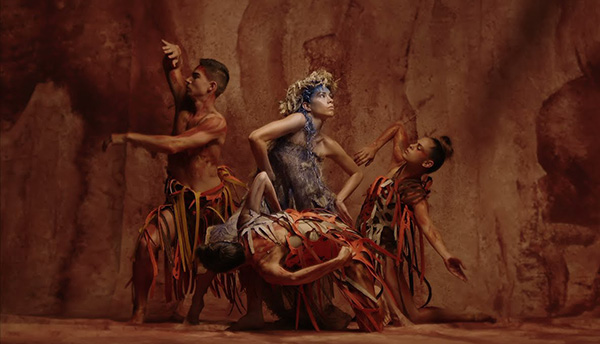 With support from the Queensland Performing Arts Centre and the Queensland Government, Bangarra Dance Theatre’s season of SandSong: Stories from the Great Sandy Desert will go ahead as planned in Brisbane.

SandSong was created by Bangarra Dance Theatre in consultation with Wangkatjunga/Walmajarri Elders from the Kimberley and Great Sandy Desert regions. It is choreographed by Artistic Director Stephen Page and Associate Artistic Director Frances Rings and draws on the stories, knowledge and memories of the past to create a new narrative for our Indigenous futures.

Queensland Minister for the Arts Leeanne Enoch noted that “necessary COVID measures had cast a shadow on the Brisbane season of SandSong”, adding that investment and support from the State Government, QPAC and additional assistance from the Federal Government through the Australia Council, “will ensure audiences can still experience the gift of Bangarra’s story telling.

“Bangarra’s Brisbane season was cancelled last year due to COVID-19, so it was a priority to ensure Bangarra could perform in Brisbane in 2021, with the company continuing on to perform in Melbourne as planned.

“At a time when so many of our theatres nationally are empty, I know Queensland audiences will appreciate the incredible privilege of being able to appreciate this sensational season.

“Bangarra and QPAC have forged a close relationship as presenting partners for 23 years and I am delighted to support an even greater engagement in Queensland for Bangarra, both onstage and off.

In addition to a 2021 Brisbane season, there is also a commitment to community engagements in Cairns in 2022.

Minister Enoch highlighted “our investment will also support Bangarra to connect with schools, communities and local dance groups in Brisbane and Cairns next year to share knowledge and develop skills.

“Elevating First Nations is a key priority of the Queensland Government’s Creative Together 2020 – 2030 Roadmap, and Bangarra’s activities in Queensland will help to build a foundation from which they can build and return, further connecting our state to this national treasure.

QPAC Chief Executive John Kotzas said the organisation was grateful for the Queensland Government and Australia Council’s support, to ensure Bangarra’s sold-out 2021 season would continue noting “we were devastated we had to postpone SandSong last year, and I want to publicly thank the Queensland Government and Federal Government for recognising both the importance of Bangarra as an Australian voice, and this work as a profound tribute to Ningali Lawford-Wolf and her Country.

“SandSong was critically acclaimed at its world premiere in Sydney, and I am elated Queensland audiences will still be able to experience the majesty of Bangarra in a couple of weeks.”

Australia Council Chief Executive, Adrian Collette added “at a time when our connection to each other and our community has been so disrupted by COVID-19, I am delighted that along with our Queensland Government partners we can support Bangarra’s Queensland season so they can share the stories, culture and perspectives of our First Nations people, on stage as well as through their engagement with schools and local communities.”

Bangarra Executive Director Lissa Twomey advised “after the cancellation of our 2020 National Tour, we are thrilled that we can, with the support of the Queensland and Federal Governments, continue to engage and share our stories with Queensland audiences.

“The company left no stone unturned in finding a way to keep the ‘show on the road’ whilst complying with COVID restrictions.”

Bangarra Artistic Director, Stephen Page, was born in Brisbane and is a descendant of the Nunukul people and the Munaldjali clan of the Yugambeh Nation from south east Queensland.

Due to the timing of travel and 14-day quarantine requirements for the Bangarra company, the Brisbane season will be shorter than originally planned. As the season is already sold out, all ticketholders for the original first three performances (13th and 14th August) will be fully refunded. Ticketholders will be contacted directly by QPAC.

SandSong: Stories from the Great Sandy Desert will be presented at QPAC’s Playhouse from 16th to 21st August 2021.