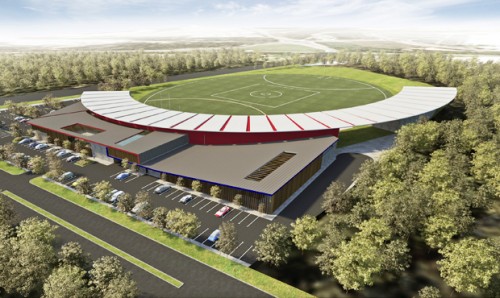 The Brisbane Lions are to move their training and administration base from the Gabba to a location at Springfield, west of Brisbane.

The new $60 million club facility will be the centrepiece of the new sports and recreation precinct in the fast growing western corridor between Brisbane and Ipswich.

Boosted by a $15 million funding commitment from the Federal Government, with additional funding coming from the Club, the AFL, Ipswich City Council and the Springfield Land Corporation, the development was facilitated by the consultancy Waypoint.

The first stage of the elite high performance training facility will include an MCG-sized field, with lighting suitable for NAB Cup and NEAFL matches; a state-of-the-art gymnasium featuring aquatic recovery, medical, coaching and player development areas; and administration headquarters for the whole organisation.

The Lions and AFL have signed a Heads of Agreement (HOA) which includes a 99-year lease of the site to the Lions - with the Ipswich City Council and Springfield Land Corporation for the development of the facility.

Club Chairman Angus Johnson said the decision, which was two years in the making, was one of the most significant for Australian rules football in Queensland as the code will now boast a big presence in rugby league heartland.

Johnson stated that the new facility "will be cutting edge, we have football department staff in Europe and the United States looking at these facilities including AC Milan and NFL clubs."

Springfield was preferred over the Queensland Sports and Athletic Centre, which hosted the 1982 Commonwealth Games and the Brisbane Broncos in the 1990s, despite lacking the same proximity to the city.

Currently the Lions train at three venues the Gabba, Yeronga and Coorparoo. While based in Springfield, the Lions will continue to play their home games at the Gabba.

Waypoint's involvement with the project saw them selected by the Springfield Land Corporation and Ipswich City Council in 2012 to formulate and lead the group's 'pitch' to the Lions in relation to the relocation opportunity, including plans for the facility and how it could be funded.

As a result of this work, the announced funding has been forthcoming while the Queensland Government is also to be approached for funding.

Springfield Land Corporation Deputy Chairman Bob Sharpless added that "the decision by the Brisbane Lions to relocate to Springfield is a significant milestone for all those involved, and is a direct result of the highly specialised advice that has been provided by Waypoint over the past two years."

In further recognition of Waypoint's expertise, it has also been retained by the Brisbane Lions to oversee all aspects of the implementation of the Elite High Performance Training Facility on behalf of the Club and project partners.

Work on the facility will start next year and is expected to be completed in 2016.