Brisbane in the World tennis spotlight 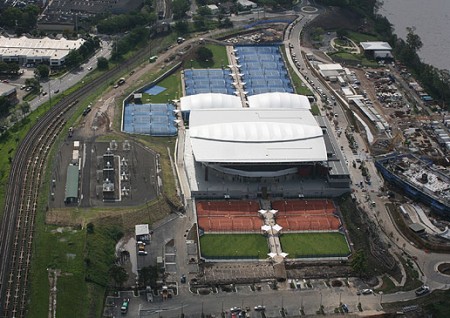 A delighted Premier Bligh stated "securing this upgrade is great news for Queensland and it will throw the international tennis spotlight fairly and squarely on Brisbane in 2012.

"This means that the world's best tennis players - the likes of Serena Williams, Kim Clijsters, Maria Sharapova, and of course Queensland's own Sam Stosur - could be coming here to give fans a first-hand look at their awesome talent.

"The Queensland Government has been a strong supporter of this event - supporting Brisbane International through Events Queensland and investing in first-class infrastructure like the Queensland Tennis Centre at Tennyson.

"And the fact that Queensland has been chosen over Asia sends a clear message that we are back in business and ready to welcome visitors and host major events in every way.

"The Tennis Centre and surrounding communities were impacted heavily by the flooding disaster this year - and it's a great symbol of Queensland's fighting spirit that a year later the tournament will be back bigger and better than ever."

Events Queensland Chief Executive John O'Sullivan stated "we are absolutely delighted that the WTA have chosen Brisbane and next year's tournament is shaping up to be a must-see event on the Queensland calendar.

"This now confirms Brisbane International's status as one of the major tennis events on the world circuit."

Tournament Director Cameron Pearson said the WTA's decision to upgrade the Brisbane International to a Premier event was exciting news for the tournament.

Pearson explained "this decision is the ultimate endorsement of the event, Brisbane and Queensland. It is also the result of the growth of the tournament over the past three years, the outstanding facilities at the Queensland Tennis Centre, and importantly the positive feedback that the players have given.

"The Brisbane International had some strong international competition for this upgrade, and without the ongoing support of the Queensland Government this achievement would have not been possible."

The Brisbane International has been running since 2009. More than 215,000 spectators have witnessed world class talent including Novak Djokovic, Ana Ivanovic, Andy Roddick and Justine Henin over the past three years. International interest in the event is high - it was broadcast in 142 countries in 2011.