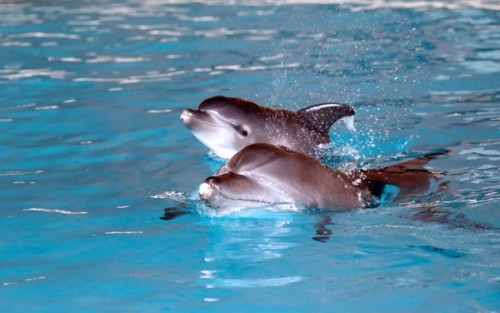 Dogged by controversy in the lead up to its 2013 opening, the Dolphin Island at Singapore’s Resorts World Sentosa has enjoyed some breeding success with the birth of four healthy calves.

Home to 27 Indo-Pacific bottlenose dolphins (23 adults and four calves) that originated in the Solomon Islands, the dolphins are supported by a team of marine veterinarians, specialists and animal husbandry professionals, together with 35 trainers from more than 10 countries.

The team works round the clock on shifts to monitor the dolphins who live in 11 large interconnecting lagoons located within Resorts World Sentosa’s S.E.A. Aquarium.

The trainers keep aim to keep the dolphins mentally stimulated through exploration and play, which includes physical contact with people, asking for a specific behaviour, and giving them enrichment devices such as floating or sinking objects as well as different materials to rub on and objects to manipulate. 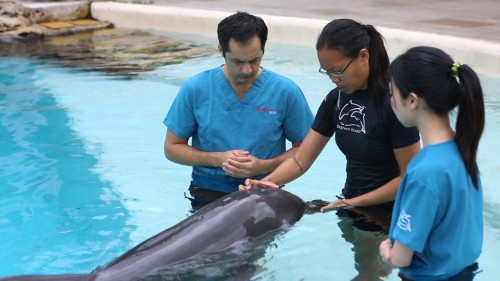 With more than 500 babies from nine species born between October last year and April this year at the S.E.A. Aquarium, the latest dophin addition is Kitali, who was born on 31st January this year.

Dolphin Island attracted considerable controversy prio to its opening as animal rights groups in Singapore and the Philippines lobbied for the release of the dolphins.

Nonetheless, the attraction has provided thousands of visitors the opportunity to learn more about dolphins.

Unrelated to Dolphin Island at the S.E.A. Aquarium, Sentosa Island attractions Underwater World Singapore and the Dolphin Lagoon will close permanently as of 26th June.

Images: A dolphin calf and mother at Dolphin Island (top) and team members care for a dolphin at the attraction (below).