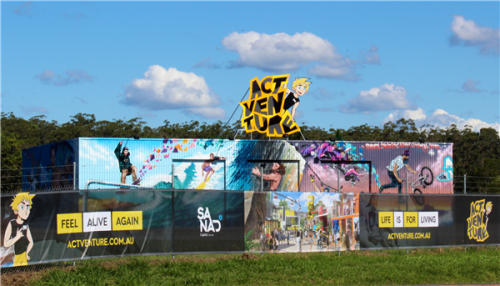 Sanad Capital, the developer of the Sunshine Coast’s planned $450 million active lifestyle destination, has revealed its new brand and mascot.

Developed so far as ACTVE, the new brand, to known as ACTVENTURE, is set to become the first and largest active lifestyle destination in Australia, bringing families and active sports enthusiast together in one location.

“We aim to inspire new standards in the active theme park industry by inspiring families to reconnect with one another through play and experience.”

Sunshine Coast Council has approved stage one of the development, a $90 million-plus waterpark with waterslides, wave simulators, kayaking and bungy jumping.

Attraction mascot JAK is being presented as the definitive Australian boy, who will greet and lead ACTVENTURE guests through the attraction’s various rides and experiences.

Sutherland explains “JAK was born by marrying our mission and vision statements. We want to encourage an active lifestyle for kids, adults and families, and we believe that JAK personifies these statements.

“JAK will represent ACTVENTURE in Australia to the world and will be a part of a growing ACTVENTURE presence around the globe.”

The new branding activations follow a difficult period for the planned attraction which has been hit by a series of court cases.

Global waterpark consultant Arthur Downing has taken court action against Sanad Capital seeking payment of an alleged $1.25 million fee for finding and rezoning the site along with preparing a masterplan for the development.

The investors were never paid, and in the District Court earlier this year Downing was ordered to pay them, but he has lodged an appeal.

A starting date for the construction of the new attraction has yet to be announced.