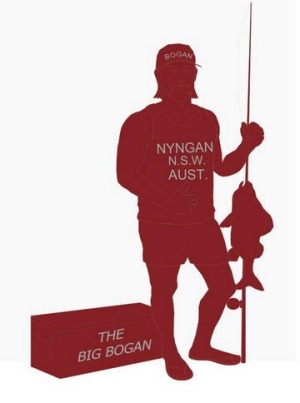 The Bogan Shire Council, in western NSW, wants to exploit its link to the often-derogatory label by building a ‘big bogan’ statue.

The latest in Australia’s tradition of ‘big things’ the 3.5-metre statue would depict a ‘bloke’ wearing shorts and a singlet with a fishing rod and a tuckerbox, which people could sit on and take photographs.

Bogan Shire Mayor Ray Donald told the ABC “we intend to put it by the Bogan River at this stage (although) we haven't got a definite site selected..

"Bogan has a bit of a negative connotation at times, but we want to get the positive side of it and get any benefit we can out of it for local tourism."

The statute would cost $8,000, but Cr Donald said work would not begin until the community gave it the green light.

To be located in Nyngan, the Big Bogan was the brainchild of Reverend Graham McLeod from Nyngan's St Mark's Anglican Church.

Reverend McLeod said given Australia's fascination with 'big things', the Shire could miss out on a big opportunity if it did not act sooner rather than later.

“Nyngan is a place where you leave Dubbo of a morning and stop for morning tea. This gives people another reason to stop.”

Reverend McLeod added “I'm even hoping we can attract people from overseas to come and sit with The Big Bogan."

The Bogan Shire has a population of about 3,000 based around the town of Nyngan.

Long dismissed as tourist kitsch, Australia's ‘Big Things’ - giant models of everything from prawns to bananas - are now being heritage-listed and recognised as works of folk art.

The gaudy structures, commissioned since the 1960s by country towns keen to attract tourists, have gathered respect as national icons.

Image courtesy of The Daily Liberal.