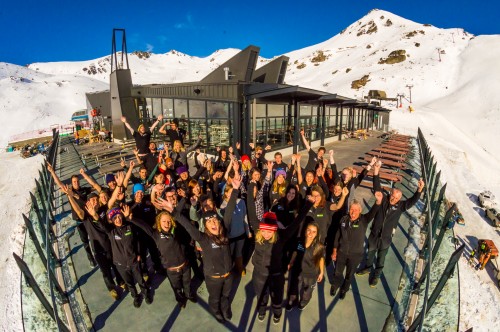 Blue skies, a new base building, perfect snow and the best opening conditions seen for over six years, made for an incredible first day at The Remarkables ski area on Saturday (27th June).

Hundreds of people headed up the mountain for the start of the 2015 season, stepping into the striking new base building for the very first time.

Reaction to the state-of-the-art new building has been overwhelmingly positive, with the look on people’s faces telling the story.

Ski Area Manager Ross Lawrence stated “the place is buzzing with a tremendous amount of energy created by happy skiers and snowboarders.”

The crowd was in high spirits as corks popped and bubbles flowed with Lawrence welcoming the first skiers of 2015 to The Remarkables.

Calling it the best season opening in recent years, he was beaming from ear to ear, Lawrence added “great snow cover and good weather makes for fantastic times at The Remarkables.

“We’ve been getting some awesome feedback on the snow and of course our amazing new facility which adds significantly to the value of the whole snow experience.”

Lawrence said 10cm of fresh powder which fell on Friday night had been the “icing on the cake” for the ski area which has opened with 1.15m of snow on the trails and wall-to-wall skiing on and off piste. 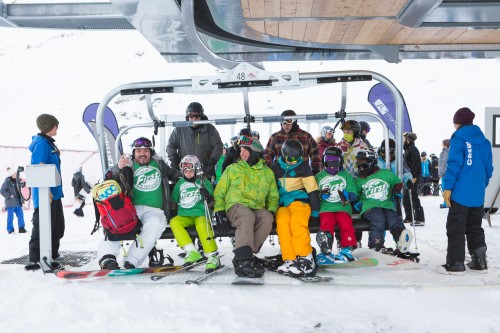 The ski area celebrated opening with a fun family day with entertainment, face painting, giveaways and balloons for the youngsters.

Around 1,500 skiers and snowboarders were on the mountain on its first day of operations.

The new base building at The Remarkables is part of a substantial $45 million investment at the ski area which also includes the new Curvey Basin chairlift, road re-alignment and sealing, trail developments, expansion of the snow-making system, and extended car parking.

NZSki Chief Executive Paul Anderson said he was delighted to see the most substantial ski area investment made in the Southern Lakes area come to life.

Anderson stated “overall the upgrade increases the capacity of The Remarkables by 40% which is good news for not only the ski industry but for all the businesses in Queenstown and the Southern Lakes that directly benefit as a result.

“Visitors and locals love the unique ski experience we offer here in Queenstown and with our ongoing investments we’ll continue to offer a truly world-class experience.”

18th September 2014 - WINTER NOT OVER AT NEW ZEALAND SKI RESORTS