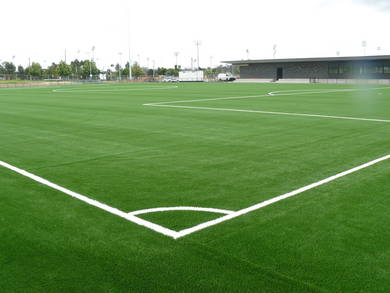 A new local stadium for NSW State League football has been opened in the western Sydney suburb of Doonside.

The new stadium features facilities for the BDSFA while the playing surface is a lus carpet of artificial turf - a FieldTurf Duraspine Pro63 surface supplied and installed by Melbourne-based Turf One.

Opened by Blacktown City Council Mayor Alan Pendleton, hundreds turned up to see the new state of the art facility open as well as the first game to be played on the FIFA 2 Star surface - one of just handful of FIFA 2 Star surfaces in Australia

Mayor Pendleton said the facility will be a great home to football for the area, stating "this new facility features a state of the art synthetic football field, two turf fields, associated field lighting, public amenities and administration facilities for the Blacktown District Soccer Football Association and their clubs.

"Visitors to this facility can look forward to exciting events in months to come including the Blacktown Spartans holding their home games here for the NSW Premier League.

"Behind today's launch began in May 2005 with council receiving funding from the NSW State Government for the development of recreational facilities in the Blacktown.

"Through this funding council delivered first class facilities for cricket AFL across the road and more recently provided $5.5 million that helped fund what we see here today.

"This wonderful project had a total cost of $6.8 million is the successful outcome of a joint venture between the NSW State Government, the Blacktown District Soccer Football Association and Blacktown City Council."

Blacktown District Soccer Football Association Chief Executive Jack Taylor said the project started over two decades ago and is proud of what he sees.

Taylor explained "25 years ago we started lobbying council and the state government about this (and) it became evident that if we didn't have anything to back us up with that we wouldn't get anywhere.

"So I invented what they call a building fund where 50 cents per player, per game went to this which made up for the one million dollars that we contributed to this facility.

"The state government then came through with the money which helped us get to where we are today.

"This facility is for all the juniors to be proud of as it is theirs as much as it is ours."