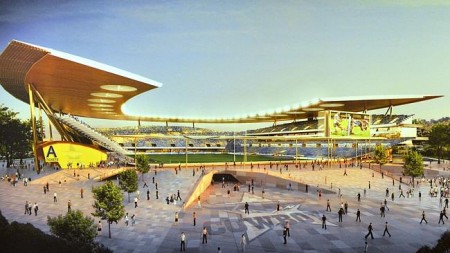 The Queensland State Election has seen both sides of politics commit to the development of a new stadium in Townsville.

Incumbent Liberal National Party (LNP) Premier Campbell Newman has pledged $150 million to build a new stadium in the centre of the city and move the rail yards out of the city and into the Townsville State Development Area.

Premier Newman described the overall development as a “massive urban renewal project” that would transform the southern edge of the city for decades to come, stating that “the stadium will be a vital part of this urban renewal.”

Building a stand-alone stadium has been costed at between $185 million and $210 million depending on the set up and capacity of the venue.

The $150 million pledged by the LNP would be funded by privatising state assets like the Port of Townsville and Ergon Energy.

The Opposition Labor Party has also pledged $100 million to the stadium, with Leader Annastacia Palaszczuk saying the funding would come from the profits, rather than sale, of state assets

The NRL has welcomed the commitments, saying that the project would provide Townsville with a world-class facility and encourage more fans to watch the sport live but had not promised any funding to the project.

Not committing to the further $60 million needed for the project, the NRL did say it would be holding further talks with the Queensland and Federal governments on how the development should go ahead.

Strong attendances for the North Queensland Cowboys during the 2014 NRL season at the 1300SMILES Stadium (formerly Dairy Farmers Stadium) led to a revival of calls for a new stadium to be built in Townsville.

Image shows an artist's impression of the planned stadium.