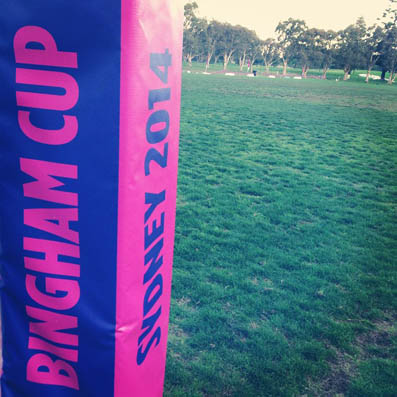 Organisers of the Bingham Cup, being held this weekend in Sydney, have reported “varying degrees” of adoption of a framework that provides sporting organisations with a clear structure and guidance to follow to ensure their sports are welcoming and safe for gay, lesbian and bisexual people.

Australian Rugby Union, National Rugby League, Australian Football League, Football Federation Australia and Cricket Australia all agreed to sign on to a new anti homophobia framework in the hopes of eliminating homophobia in their codes ahead of the Bingham Cup – which is being held from Friday 29th August to Sunday 31st August.

Bingham Cup Sydney President Andrew ‘Fuzz’ Purchas acknowledged that this was a bold and ambitious timeline, given the comprehensiveness of the anti homophobia and inclusion framework, but was pleased to report an improvement in the state of play.

Purchas explains “the Bingham Cup committee has received written updates on the implementation of the Framework from each sport.

“Based on this information only, it appears there has been varying degrees in which the Framework has been adopted and implemented by the major sports.”

In order to provide an accurate assessment of the implementations, Purchas said analysis would be undertaken but this would not commence until after the end of the Bingham Cup Sydney.

The Anti-Homophobia and Inclusion Framework is just one of several programs initiated by Bingham Cup Sydney 2014 to tackle homophobia in sports.

Purchas added “we also commissioned the first international study on homophobia in sport in partnership with the Sydney Convicts Rugby Union Club and the Federation of Gay Games. “Over 7,000 people have taken part in the study, including more than 2500 people from Australia. We released a few, preliminary results for Australia prior to the Bingham Cup. Unfortunately these results show homophobia is commonly experienced and witnessed in Australian sports.”

The full results of the study will be released in October, and Purchas expects the report will also provide insight on how each sport compares and how Australia rates as a nation when it comes to inclusivity.

He concluded “when we release the final results from the Out on the Fields study, we will also provide the community with a thorough assessment of how well the Anti-Homophobia and Inclusion Framework has been implemented by Australian sports,” said Purchas.

“Following the Bingham Cup, we will work with the Australian Sports Commission and Australian Human Rights Commission as well as each sporting organisation to prepare this detailed progress report.

“Australian Sports Commission and Australian Human Rights Commission are also continuing to work on the development of policies in relation to transgendered and intersex people.”