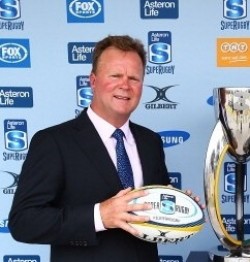 Having offered to step aside prior to today's Emergency General Meeting, Australian Rugby Union Chief Executive Bill Pulver is to remain in his job.

The meeting, which came about as a result of the Victorian Rugby Union and the Rugby Union Players Association combining to force the ARU to explain move to cull one of Australia’s five Super Rugby team, also failed to halt the plan

As of the commencement of the meeting, the result was not in doubt with the NSW and Queensland Rugby Union having declared their support for the ARU’s policy of reducing its Super Rugby component to just four teams.

The meeting also supported Pulver (pictured), whose contract is due to expire in February next year. By that time the ARU will either have culled a team or been defeated by the legal and/or arbitration process that the Western Force (one of the two teams being considered for the cull) are banking on to save them.

The meeting also saw ARU Chairman Cameron Clyne advise that the governing body was no closer to announcing whether it will be the Force or Melbourne Rebels culled as part of SANZAAR's downsizing to a 15-team competition in 2018.

Clyne, though, said it was significant that a resolution to have the ARU reconsider its decision to cut a team had been defeated.

He explained “the majority of members have voted in support of going from five teams to four.

"The motion that did pass was to facilitate a discussion around the establishment of a Super Rugby commission.

"We've had that commission in the past so we're very comfortable to have that discussion and work out as to whether we do establish that in the future."

The ARU announced in April that either the Force or Rebels would go but, with both franchises in legal battles with the governing body, a decision on which franchise is chopped remains no closer.

Clyne added "we've got teams obviously that are looking to stay in the competition so we can't really control that time frame.”

After initially saying a franchise would be cut "within 48 to 72 hours", there now remains the farcical possibility that the 2017 Super Rugby season will be finished in early August but Rebels and Force players still not knowing if their team will be around next year.