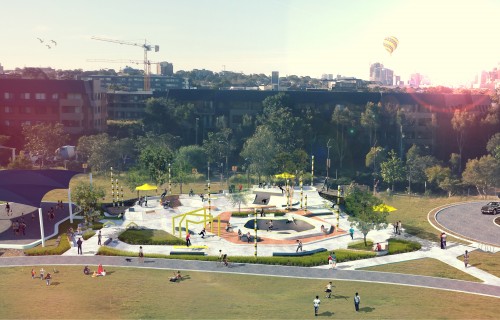 The City of Sydney has announced what will be one of city’s biggest public skate spaces with plans for a new skate plaza at Sydney Park.

A proposed scope of works, scheduled to be considered by the City of Sydney Council later this month, outlines the concept design for a major urban skate plaza and flow bowl suitable for skateboards, scooters and BMX bikes.

Commenting on the plan, Sydney Lord Mayor Clover Moore stated “this proposed skate space marks another major step in the transformation of Sydney Park from an industrial site some years ago, into a 44 hectare park land to be enjoyed by tens of thousands of residents.

“We’ve listened to calls from the city’s skateboarding community who’ve been asking for more skate facilities for some time.

“Not only are we building a new skate space in Sydney Park, we’re including the flow bowl straightaway rather than building it in a few years as originally planned. This is a result of extensive feedback we received when consulting with our communities.”

Features of the new skate space include:

“The park will link with the new children’s bike track and gymkhana covered area, allowing children to progress into the skate space as they grow up.

“As part of the works, we’ve also proposed a new pathway system to provide the missing link to the southern area of the park.” 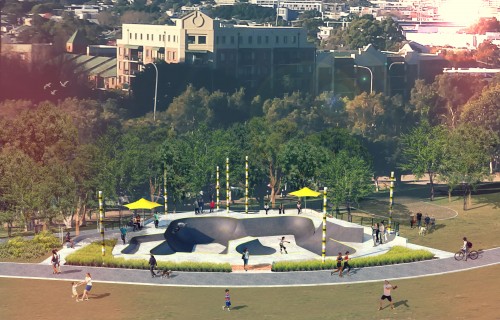 Cameron Sparkes, from the Sydney Skateboard Association, said the number of skateboarders was growing rapidly and would welcome the skate space.

“We want to see more public skate parks and shared spaces in the City of Sydney and this is a great start.

“Our community is rapidly growing. Skateboarding is debuting as an Olympic sport in Tokyo for the 2020 games and we’ve already seen a huge increase in participation rates since that announcement in early 2016.

“Our community’s demographic is extremely broad. All year round you can find boys and girls as young as six at skate parks, right through to people aged over 50.”

The City is currently restoring the landmark Sydney Park chimneys, remnants of the former brickworks that have towered over the inner city since 1893.

Construction is also underway on the Sydney City Farm, an urban architecture project in the southern end of the park. The farm will grow seasonal produce to be sold at farmer’s markets and host workshops and community events.

If approved, construction of the skate space is scheduled to begin in April 2018 and be completed by mid-2019.

Images: The planned skate plaza (top) and its proposed flow bowl (below).