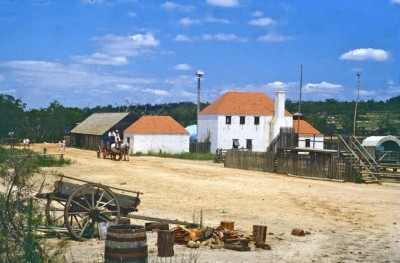 Conservationist and aspiring independent MP Jake Cassar is pushing for the Old Sydney Town attraction on the NSW Central Coast to be revived.

The heritage attraction, which in its heyday it attracted more than 50,000 people to the Central Coast each year, closed in 2003.

The site has remained largely untouched since its closure leading to a local campaign led by Facebook group 'Bring Back Old Sydney Town', with more than 700 'likes' wanting to see the attraction revived.

"I really think it's important to not only the Central Coast, but to our country. I believe the arts, culture and entertainment are key to bringing Central Coast tourism to life."

Cassar said he intended to make the revitalisation of Old Sydney Town a major issue at next year's federal election, at which he intends to run as an independent candidate, adding "I would like to bring the right people together to talk about the prospects of revitalising and reopening this iconic park.

"I would hope that if the park were to reopen, it would provide a strong representation from an indigenous perspective, and in full consultation with the Aboriginal community.

"If planned properly, this would create around 400 local jobs directly, while bringing business to other local tourist attractions, venues and businesses.

"If you throw in some reasonably priced accommodation and some nightly ghost tours and historical yarns around the campfire, I believe our old jewel would be back."

Cassar has yet to provide indications as to how his plans would be funded and whether the attraction would be sustainable - NSW being a challenging market in which to operate attractions, as the closure Wonderland Sydney, Sega World Darling Harbour and the Fox Studios Backlot over the past decade confirms.