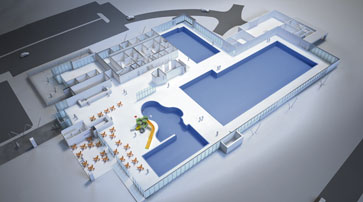 Bendigo's Mayor says the council is proceeding with plans for a new aquatic centre in the city, despite continuing opposition to the project.

The City of Greater Bendigo is about to call for expressions of interest to build the $30 million facility in Kangaroo Flat.

Development of the new Greater Bendigo Indoor Aquatic Leisure and Wellbeing Centre will see the demolition of an existing facility at Kangaroo Flat.

However, even though a recent survey found most residents wanted the existing facility retained, Bendigo Mayor Peter Cox said the council had made up its mind.

Mayor Cox told the ABC "I can understand the community, the Kangaroo Flat Community Leisure Centre, being very disappointed that their building's going to be demolished.

"However, the majority of councillors decided that we need to move on with this project.

"It's a major wish of the wider community and that's the decision we've taken.

"Council has been very decisive about the Kangaroo Flat Leisure Centre and at the moment it's going to be demolished.

"They're seeking further information but it'll take one extraordinary change of mind of council to do anything differently than proceed as it has already decided."

The business case for the new facility confirmed that a 25-metre indoor pool will be cheaper to build and run than a 50-metre pool.