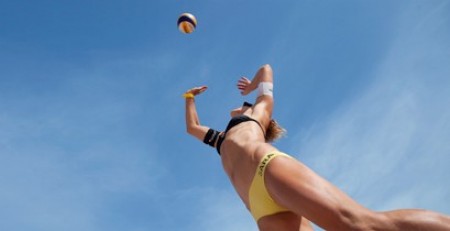 Beach volleyball will make its debut on the Commonwealth Games program at Gold Coast 2018 in a historic move that will increase the number of sports being contested at the Games from 17 to 18 for the first time.

Two 12 team tournaments will be contested, one each for men and women, with two players per team with a qualification system to be developed in collaboration with the International Volleyball Federation (FIVB).

Announcing the addition, CGF President Louise Martin stated “the CGF Executive Board is delighted to approve the inclusion of beach volleyball in the sports program of the XXI Commonwealth Games, which will allow nations to compete in more sports, engage and inspire spectators, broadcasters and commercial partners, and create a spectacular sporting showcase for the Gold Coast, Queensland and Australia on the world stage.

“This innovative, collaborative initiative, undertaken and initiated by the Gold Coast 2018 delivery partners with support from the CGF, is a fantastic example of the collective ambitions set out in the CGF’s Transformation 2022 strategic plan and we look forward to experiencing beach volleyball for the first time ever at a Commonwealth Games.”

Beach volleyball is expected to be a stand-out sport at this year's Olympic Games in Rio de Janeiro due to the famous Copacabana venue, and the sport could be similarly iconic in Gold Coast.

As of February 2014, GOLDOC had announced that no additional sports would be added to the program but that position has now changed.

GOLDOC Chairman Nigel Chamier explained “this announcement is a great outcome that will only add to what is already an exciting program.

“The people of the Gold Coast, Queensland and Australia can expect amazing venues, incredible sport and a lifetime of memories.”

A location for the beach volleyball will now be “scouted” with a pleasing on the eye venue which also has enough room for the necessary infrastructure required.

Queensland's Commonwealth Games Minister Stirling Hinchcliffe added “the Gold Coast has some of the best beaches in the world, which is why we have campaigned strongly to the Commonwealth Games Federation to include beach volleyball as part of the sporting program in 2018.”