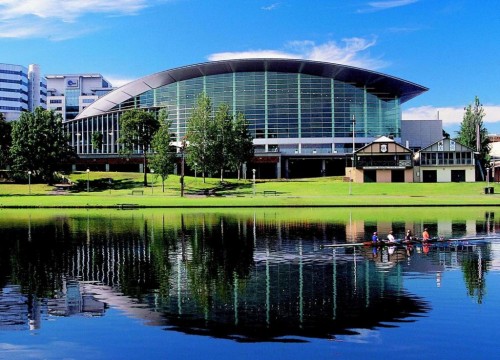 Baulderstone has been selected as the managing contractor for the $350 million expansion of the Adelaide Convention Centre (ACC), originally built by Baulderstone in 1987.

Stage 1: Expand the capacity for exhibitions by adding some 4,200 metres2 of multi-purpose convention floor-space, to the west of the existing complex, with associated new pedestrian entrances, meeting rooms and support infrastructure. Update and refurbish the existing North Terrace facade of the Exhibition Hall.
Stage 2: Replace the original plenary building and provide a new and integrated 2,500 to 3,000 seat meeting facility.

The project will also focus on upgrading the Convention Centre's interface with the Riverbank Precinct, with a particular emphasis on improving pedestrian connections and way finding elements to North Terrace, King William Street and Montefiore Road.

Baulderstone's expertise meant that two architectural firms invited Baulderstone to participate in the competitive tender for the ACC contract.

Both tenders were shortlisted and the submission by the Woods Bagot/Baulderstone Consortium was selected as the winning bid.

The project will be developed and delivered under a collaborative arrangement with the Government of South Australia.

The Convention Centre extension is the centrepiece of a masterplan proposal to redevelop Adelaide's entire Riverbank precinct.

The project is a major addition to Baulderstone's extensive portfolio of landmark South Australian projects.

Major construction works are due to commence in late in 2011.