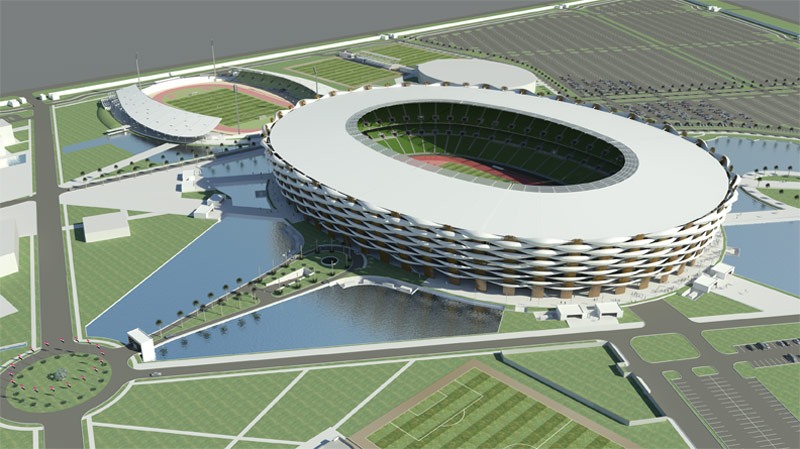 While the development of major sporting infrastructure in Arabian Gulf nations is widely reported, the development of the Basrah Sport City in nearby southern Iraq appears to have been overlooked by international media - perhaps as a result of the world's focus on conflict in the nation.

Yet this project is potentially much more than the development of 'another' sporting precinct as it is already proving to be a source of great pride to people of the Basrah region, with hope that sport will bring together the previously conflict torn Iraqi nation.

Basrah Sport City is multi-phase, multi-venue, mixed-use sport and recreation precinct being developed with the goal of supporting the training and growth or sport in Iraq.

Phase 1 of the project, being funded by the government of Iraq with a budgeted spending of $550 million dollars, features a main stadium with capacity of 65,000 people, a secondary stadium with a capacity of 20,000, four training fields, athlete housing and a four major hotels.

Construction of the project started in July 2009 and expected to be completed by late 2012.

Phase 2 of the project, which is expected to be larger in scope and budget, is to include three smaller multi-use arenas, a major aquatic facility, a tennis stadium, amusement park, extensive training facilities and a mosque.

A major driving force for the project is Basrah's upcoming hosting of the 2013 Gulf Cup of Nations (known as el Khaleeji). Held every two years, Iraq's hosting of el Khaleeji was approved by the seven Gulf football federations who saw the hosting as a way to reconcile differences between Iraq and the other countries in the Arabian Gulf region. However, the countrys' football stadia did not meet the standards of world football governing body FIFA, which led to the plans to developed the Basrah Sport City.

The contract of building the city was won by Abdullah Al-Jaburi a major Iraqi construction contractor and two American companies 360 architecture and Newport Global.