The new Barangaroo Reserve, a six-hectare park on the edge of Sydney’s CBD, has been officially opened, unlocking a part of Sydney Harbour's foreshore that has been closed for 100 years.

The $250 million park, named after the Cammeraygal tribeswoman Barangaroo, was created from a former container wharf at Millers Point, restoring the industrial waterfront with a sandstone foreshore.

Hundreds of people gathered in the park on Saturday to mark the occasion, with NSW Premier Mike Baird and former Australian Prime Minister Paul Keating among dignitaries addressing the crowd.

Premier Baird paid tribute the former Prime Minister for his vision of a natural bush headland, and for lobbying for the restoration after 100 years of industrial use.

Speaking at the launch yesterday (22nd August) Premier Baird stated “Barangaroo Reserve is a stunning new park that will give current and future generations a new place to enjoy the best harbour in the world.

“It’s hard to imagine that just a few years ago this new green headland was an ugly, locked-off relic of Sydney’s industrial past.

“A big part of that has to do with the vision of former prime minister Paul Keating, who saw the opportunity to honour our history and restore this to its rightful position as it used to be and build an incredible shrine effectively to this city which recognises its Aboriginal culture, its history and connection into this great city.” 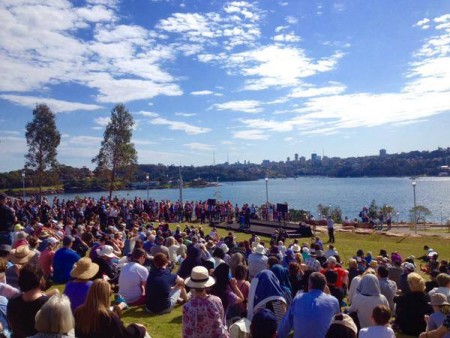 Also speaking at the opening, former Prime Minister Keating said the headland and nearby Goat Island were important sites for the Sydney's Indigenous inhabitants.

He explained "what an opportunity to pay commemorative regard, to acknowledge the history and their long contribution to the land."

The former Prime Minister lobbied successive  SW Governments to redevelop the former dockyard, determined to return the area to the naturalistic park it would have been for the first inhabitants.

He had wanted Barangaroo Reserve to complement the four other headlands in the western harbour: Balls Head, Ballast Point, Balmain and Blues Point.

Barangaroo Reserve Design director Bob Nation said the area had been planted with Sydney natives and the site followed the original 1836 shoreline, adding "all of the sandstone blocks, and there's about 7,000 of them, have been taken out of the site to excavate for a car park and arranged around the foreshore in a strict geological outcome."

The park features lookouts, walkways, cycleways and a natural amphitheatre.

It opens up a view of the harbour and the bridge not seen for a century.