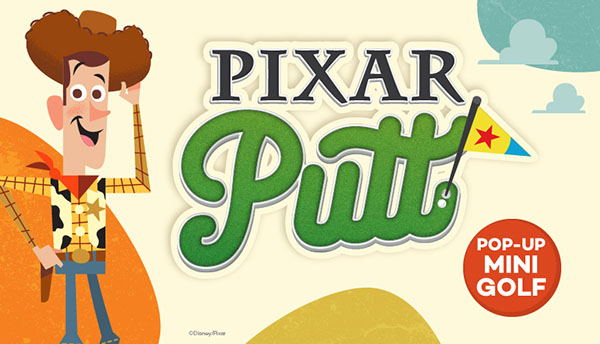 Bankwest Stadium have announced that the popular mini-golf attraction, Pixar Putt, is coming to its precinct this September during the school holidays - delivering a safe, fun community experience.

The immersive pop-up mini-golf experience consists of interactive holes inspired by the stories, characters and icons from some of Pixar’s most popular films including Finding Nemo, The Incredibles, Monsters, Inc., A Bug’s Life, Wall-E and Inside Out.

While many familiar favourites will return, this year’s Pixar Putt at Bankwest Stadium will see the debut of five brand-new holes, including Disney-Pixar’s latest hit, Onward which features ‘Guinevere’ the van; a new Toy Story 4 hole featuring Benson, the ventriloquist puppet henchman; completely redesigned holes inspired by Pixar favourites, Ratatouille and Coco; plus a hole inspired by the brand new movie Soul which is scheduled for a cinema release in December!

Bankwest Stadium Chief Executive Daryl Kerry said the venue had quickly become a centre of celebration in the community and the Pixar Putt concept was another exciting addition to the calendar with Disney+ Drive-In also announced for Banwkest Stadium this September - transforming the precinct into a Disney-themed wonderland.

Kerry notes “this has been a challenging year for everyone and we are delighted to be hosting a number of safe, fun community-based events.

"Bankwest Stadium has been embraced by the wider community and is again showing it's a home for everyone and any event."

Pixar Putt punters will also be able to take advantage of Ticketek’s world-leading partnership with Afterpay. Available via the Ticketek app or website, Afterpay is the world’s largest buy-now-pay-later service, offering fans greater flexibility to pay for tickets in four equal instalments and secure their tee-off with the first payment.

TEG Managing Director Live, Tim McGregor advises “we are thrilled to be bringing back Pixar Putt to Sydney this September and debuting five brand new holes for the first time worldwide, here in Parramatta.

“Pixar Putt will be operating under a full COVID Safe plan in consultation with Bankwest Stadium and the NSW State Government, and we are very proud that the event already has good COVID-safe measures built into the course. With only four golfers per hole and 18 holes spread over 800 square metres at Bankwest Stadium Precinct, there is plenty of space for patrons to stay safe, have fun and kick some serious Putt!”

The safety of patrons and staff is TEG Life Like Touring and The Walt Disney Company’s top priority and Pixar Putt will operate with a commitment to a COVID Safe environment.  Pixar Putt’s COVID Safe measures include capped player numbers on the course at all times; physical distancing measures in queues and on course; sanitiser stations located onsite; plus sanitising of all golfing equipment between users for every session each day.

The Sydney community will be able to experience the Pixar Putt attraction from Saturday 26th September until Sunday 25th October.

Following Pixar Putt’s overwhelming popularity in 2019 and to comply with COVID Safe protocols, booking online and in advance is strongly recommended for patrons to secure a preferred tee-off time. Door sales will be possible, but subject only to session availability. And for this Sydney season, there will also be extended putting hours for all ages on Thursday, Friday and Saturday nights, with Pixar Putt After Dark open until 10:00pm.

For event details and to buy tickets go to https://www.pixarputt.com.au/