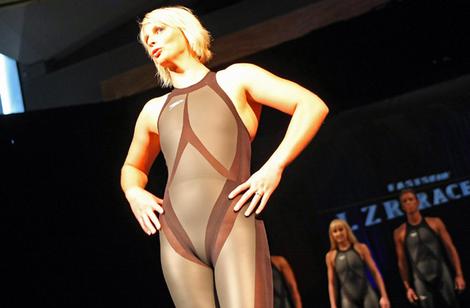 Swim coaches are considering banning the controversial swimsuits that contributed significantly to the rewriting of the record books before and during the Beijing Olympic Games, according to a report in the Sydney Morning Herald.

The newspaper reports that swimming coaches have been in talks and are preparing to make a recommendation to Swimming Australia's board on the suitability of the suits, in particular the Speedo LZR Racer.

Some coaches are believed to favour following the lead of the US coaches and ban the use of such high-tech suits by swimmers under 12 while others want the swimsuit banned across the board.

Australian head coach Alan Thompson said a formal response had not yet been formulated, explaining that "we are having discussions about it and doing further investigations - looking at FINA's approval, the rules in the rule book and the suits in general and canvassing the philosophies in swimming, whether it is good or bad", adding "hopefully, we can come to some sort of position by the end of the year."

The world governing body, FINA , faces elections next year, with long-standing president Mustapha Larfaoui of Algeria likely to be challenged by the FINA treasurer Julio Maglione of Uruguay. Both men are under increasing pressure to state their views about the future of the revolutionary swimsuits, which use compression and low-drag material more akin to plastics than fabrics to improve times, and have polarised the swimming community.

The Sydney Morning Herald went on to report on a clamour for the suit to be banned (and to allow the world records to stand but with an asterisk beside pre-February 2008 times) has come about after startling analysis of the times recorded at the Olympics in August.

Professor Joel Stager of Indiana University found that, mathematically, the 100 metres men's freestyle times set in Beijing would not have been reached for another 16 years, if not for the suit. He also found 60 of the all-time top 100 times were swum this year since the Speedo suit became available.

Statistically, Stager found the improvement of times was between 1.3 to 2.6%. Swimmers across the board, not just the swimmers who set 43 new world records between February and August - were improving their times by about 2%.

"The swimsuit no doubt helped people," Thompson concluded, but added that training methods and sports science had also contributed to the dramatic results.

Forbes Carlile, a pioneer in the sport, said FINA should introduce a standard racing costume for all, stating "the future harm which is being done by this suit - the prohibitive cost and exclusivity of use, even without addressing moral and ethical considerations, is great."

Speedo's Lazer Racer Suit was introduced to the Australasian leisure industry in the article A Faster Skin in the May/June 2008 issue of Australasian Leisure Management.