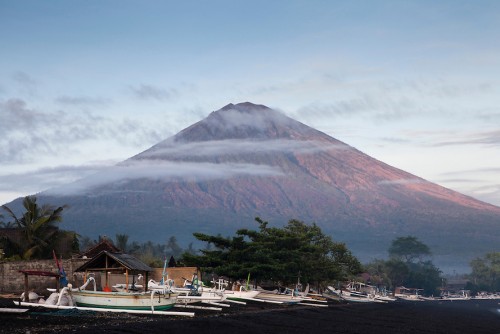 Fears of a volcanic eruption by Mt Agung on the Indonesian island of Bali has led to an exodus of visitors, with a resultant massive impact on the local tourism industry.

With Mt Agung and its surroundings being rocked by hundreds of earthquakes every day, an exclusion zone has been placed around the massive volcano amid fears that it may erupt.

Uncertainty over whether the mountain will erupt - and how long an eruption would continue - has prompted some tourists to cancel bookings and Indonesian officials and businesses fear tourist will abandon the holiday island en masse.

In an ABC report on how the uncertainty is impacting local businesses, Nyoman Kari, a cafe owener at Amed Beach “all tourists have gone home because they are afraid of the eruption, two weeks ago, all tourist started to go home.

"Businesses like the speedboats have been evacuated to a safer place … the speedboats are very expensive, so we wanted to move it away from the ash.”

Restaurant worker Komang Putra said he had gone two days without serving a customer, telling the ABC "before the news about Mount Agung, we'd maybe have six tables during the day and it would get more crowded at night, around eight tables," he said. "But for the past six or seven days, it has been quiet."

Mount Agung last erupted in 1963, killing 1,000 people. There are more than 100 volcanoes in Indonesia and once they start to show high levels of activity, it can take weeks and even months for them to erupt.

Flights are operating as normal into Bali’s airport and the island's tourism department issued a letter this week to reassure tourists, advising “the island is safe except for areas around Mount Agung. We urge tourists to continue visiting.”