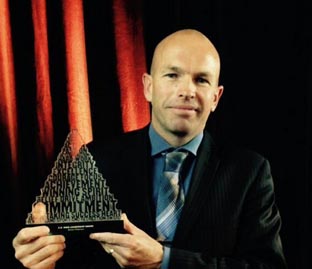 Excellence and outstanding achievement in sport and recreation in New Zealand have been recognised at the annual Sport and Recreation Awards ceremony in Auckland.

The awards showcase some of the dedicated individuals, teams, clubs and organisations around the country that embody the true spirit of sport and recreation.

Rowing NZ Chief Executive Simon Peterson (pictured above) received the prestigious C K Doig Leadership Award, which recognises an executive sport or recreation leader who displays outstanding leadership in relation to their organisation or the sector as a whole.

Commenting on Peterson’s receipt of the Award, Sport NZ Chief Executive Peter Miskimmin stated “Simon has guided Rowing NZ through some of its greatest international successes, and has delivered a number of major initiatives in 2014 to ensure rowing retains its cutting edge.

“He has been instrumental in extending the high performance rowing program in Cambridge with a $1.1 million redevelopment and oversaw another highly successful year for the elite programme where nine medals – including six gold medals – were won at the World Championships, the highest number of gold medals ever.

“At the under-23 World Champions, New Zealand won six medals, including three gold medals to be the highest-ranked country.

“Not a rower himself, Simon has earned the respect of rowers.

“His strong leadership skills and outstanding record have seen him build a strong platform for the continued success of rowing, a sport which resonates deeply with New Zealanders.”

Commenting on these awards, Miskimmin added “the passion and dedication each of these award winners has demonstrated through their careers is immense, and is still continuing. These award recipients have all given life-long service to sport and it’s because of people like these that we have a world-leading sport system in New Zealand.”.

And to recognise those who volunteer their time to help make sport happen in communities, Dennis Mroczkowski from North Harbour was announced 2015’s Sport Maker of the Year.

Awards were also presented in Event Excellence to NZCT AIMS Games International Sporting Championships; and in Communications Excellence to Sport Bay of Plenty’s 2014 Communications Programme. Sport Gisborne Tairawhiti was recognised with the award for Community Impact for its ‘Softball Strikes Back’ programme; and ATEED was awarded Innovation Excellence for the Dick Smith NRL Auckland Nines. The award for Commercial Partnership went to Yachting NZ and Aon NZ.

Details of the winners and their citations are:

Event Excellence – NZCT AIMS GAMES International Sporting Championships
Over 11 years, NZCT AIMS GAMES has grown to be New Zealand’s largest junior sporting festival – expanding from four sporting codes and 750 participants in 2004 when it first began to 17 sporting codes and 7,500 competitors last year. Last year, a total of 228 schools from around the country took part at 15 different venues across the Western Bay of Plenty, helping showcase the region, generating 37,500 visitor nights and contributing $1.52 million to the region’s economy.

The 2014 AIMS GAMES was an outstanding success, exhibiting a high level of professionalism in event management achieved on a limited budget, and representing an event intricately linked with the community.

The programme has been progressively implemented over the last two years, with the development of a new brand and website kicking off the new strategy, and more elements added over time. A variety of channels have been utilised across traditional and digital media, in recognition of the diverse audiences in the Bay, but with consistent messaging and branding. Significant emphasis was also placed on including all staff as the ‘voice’ of the organisation, and they have now become regular contributors to the weekly digital and regional print forums.

In the early 2000s the traditionally popular sport of softball in Tairawhiti went into a deep decline with no NSO sanctioned softball for nine years. Junior softball was non-existent, clubs had folded and a growing gang presence in senior grade competition deterred people from the sport. In 2012 Sport Gisborne Tairawhiti and Tairawhiti Softball Association (TSA) agreed to work together to rejuvenate the sport, delivering quality competitions, initiating coach and umpire development, securing funding and building a pathway for player development.

Today softball is thriving in Tairawhiti – there are now 52 junior league teams, six rep teams and two New Zealand players, pathways for coaches and umpires, as well as definitive change around gang influence. TSA has also developed a strong reputation as a best practice model for softball associations nationwide. 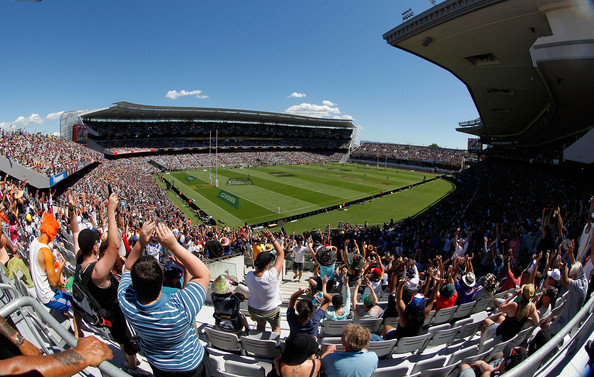 Innovation Excellence – Dick Smith NRL Auckland Nines
Staging the Dick Smith NRL Auckland Nines last year (pictured) was a courageous move by ATEED, in conjunction with Duco and NZ Rugby League, with significant associated financial risk. However, it proved to be a highly polished high end sporting event with outcomes exceeding all targets in terms of attendees, tourism numbers and television viewership – resulting in a net contribution of $9.35 million to the Auckland economy.

In addition, a strong local engagement programme was developed to run in parallel with the Nines. This included a club programme where each of the 16 NRL teams visited a grassroots Rugby League Club in Auckland, with 30,000 people attending the ‘meet and greet’ events providing a community engagement opportunity as well as growing grassroots rugby league numbers.

Securing the rights to the event from NRL, and successfully bringing together all of the16 professional NRL teams for the two-day tournament, were significant achievements. It was the first time the entire NRL had been brought together in a country outside of Australia providing media and fans with unprecedented opportunities to engage with the players.

Commercial Partnership – Yachting NZ and Aon New Zealand
The Christchurch earthquake proved to be a catalyst for a successful partnership between Yachting New Zealand and Aon New Zealand. With the post-quake cost of insurance sky-rocketing, many yacht clubs were being hit with huge cost increases, with some yacht clubs forced to consider whether they could remain operational.  Yachting NZ went looking for a partner that could help alleviate these costs, and developed with Aon NZ an insurance programme specifically designed for the needs of yacht clubs, with significant savings on premiums.

Since then the partnership has grown into one that not only supports the clubs with discounted insurance, but has delivered a three year sponsorship of the Yachting NZ Youth Development Programme, with an integrated marketing and communications activation programme supporting it.

The success of this relationship has resulted in Aon New Zealand expanding this successful model into other national sport organisations for the wider benefit of sport in New Zealand. It has been a true commercial win-win for both organisations.