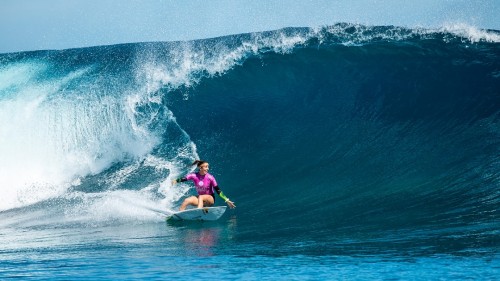 The world's best surfers and skaters, along with Aussie musicians, are set to converge at the birthplace of professional surfing, Sydney's Manly Beach, for the country's biggest-ever surf, skate and music event; The Australian Open of Surfing, presented by Hurley and Billabong.

Working closely with Destination NSW and Manly Council, the free and family-friendly nine-day celebration of youth culture will showcase the best of Sydney's unique beach lifestyle and vibrant youth culture via surf, skate and music.

Being staged from 11th to 19th February the event will see an exciting mix of the world's best surf athletes competing in six-star men's and women's ASP-sanctioned surf contests, men's and women's pro junior star-events, a world-class skate bowl featuring the world's best skateboarders and two live concerts on the Channel [V] music stage from some of Australia's top musicians.

Women's world No.2 Sally Fitzgibbons, world No.4 Tyler Wright and the majority of the women's surfing tour will also showcase the best female surfing has to offer, right in the heart of Sydney.

Fitzgibbons, the reigning US Open of Surfing champion explains "the event will be an extension of the US Open which features live concerts and skate events on the beach. There will be a lot of exciting things to see and do which creates an amazing atmosphere to compete in.

"To bring back some of that magic for Sydney-siders to enjoy will be amazing and having it so close to the city makes one of Australia's most popular sports really easy for everyone to enjoy."

Skateboarding legends Bucky Lasek and Bob Burnquist will join the likes of super star Curren Caples in the Pro Skate Beach Bowl for their share of $50,000 prize money, while arriving in Australia to join Occhilupo, Parkinson, Adrian Buchan and Josh Kerr in the $155,000 men's Surfing Pro will be international stars Kolohe Andino, Miguel Pupo and Brett Simpson - with more to be confirmed.

World No.2 Joel Parkinson adds "I surfed in the US Open at Huntington, California last year and I was blown away by the vibe surrounding that event.

"It's great to have pro surfing back in Sydney again. I remember as a kid there were all these huge contests down at Narrabeen or Manly, but the Sydney contests kind of dried up just as I got on tour. It's great to finally have another big contest down there after all this time. I can't wait."

The smoke and alcohol-free event is expected to welcome more than 100,000 people to Manly, the location of the very first World Surfing Championships in 1964 and the first Australian beach to legalise day-time swimming in 1904.

Destination NSW, along with major event partners Hurley and Billabong, expect the Australian Open of Surfing to inject more than $6 million into the local community.

For more information on the event go to www.australianopenofsurfing.com