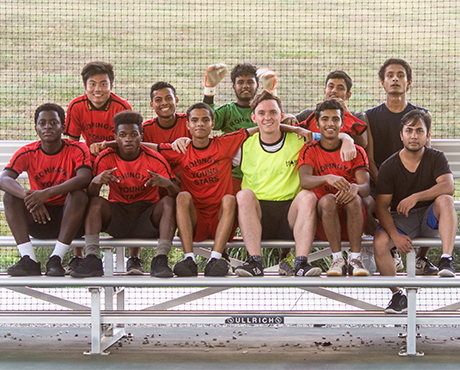 A collaboration between the Australian Catholic University (ACU) and the Queensland University of Technology that engages youth students from refugee and migrants backgrounds through football and education has been recognised with Australian University Sport’s Community Leadership Award.

The Kicking Goals Together program, which involves a group of Rohingya young people from refugee backgrounds in Brisbane, helps young people identify their personal strengths and allows them to work on skills that will help them in the workplace.

ACU Exercise Science Lecturer Matthew Pink said the Rohingya people are among the most persecuted people in the world and their own country does not recognise them as Burmese citizens.

Pink explains “without many resources, the Young Stars started their own football team and came to ACU for support in both football and education.”

After games against ACU students, the Rohingya youngsters take part in a pilot ‘Skill Up’ program, which is jointly run by ACU and Multicultural Development Association (MDA) Ltd as part of the Migrant Youth Vision Project (MYVP).

The MYVP is an initiative led by MDA and is aimed at young people from refugee or migrant background, aged 15-24 who have arrived in Australia less than five years ago.

Skill-Up helps young people identify their personal strengths and allows them to work on skills that will help them in the workplace.

The group sessions provide a range of high-energy activities focused on the development of competencies in the common skills Employers need including communication, networking, problem solving, team work and developing a strong personal brand.

Presented at the end of last year, the 2017 Australian University Sport (AUS) Awards recognised a range of achievement in university sport.

Among the other AUS Awards winners were the University of the Sunshine Coast's Jordan Mercer, who claimed the prize for the Most Outstanding Sporting Achievement of the Year after securing three gold medals at the 2017 World SUP and Paddleboard Championships in Denmark.

Hannah Macdougall won the award for the Most Outstanding Performance of the Year by an Athlete with a Disability having secured three medals at 2017 International Cycling Union (UCI) Para-cycling Road World Cup events.

The Most Outstanding Performance of the Year by an Indigenous Athlete prize went to Courtney Hagen.

Hagen is a multi-disciplined athlete who helped Queensland win the 2017 National Indigenous Cricket Championships and is considered an integral member of the Toowoomba Mountaineers, a Queensland Southern Basketball League team.

She is also a two-time 2017 Southern University Games medallist.

The Team of the Year and Coach of the Year awards went to Macquarie University's men’s 3x3 basketball side and Chris Lucas respectively.

Lucas was the head coach of the Australian women’s basketball team that won the gold medal at Taipei 2017.

The AUS Awards, presented since 2001, highlight the many outstanding performances and contributions recorded in the university sport sector.

The 2017 edition saw more than 50 nominations in the eight award categories.

"Through the dedicated services provided by elite-athlete friendly University staff - including provision of scholarships, access to industry leading training and research facilities, and assistance in exams and assignment deadlines - the collective work of AUS members ensures elite student-athletes can pursue sporting excellence while laying the foundation for their long-term future through tertiary education."

Image: Participants in the Kicking Goals Together program.