Australian Sports Commission calls for Steve Smith to be stood down 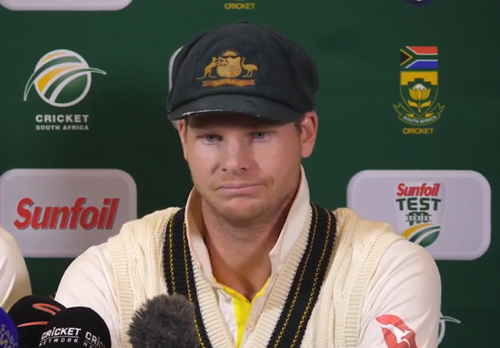 Australian Sports Commission Chair John Wylie, the ASC Board and Chief Executive Kate Palmer have called for Steve Smith “to be stood down immediately (as captain of the Australian cricket team) by Cricket Australia.

On a day described as a “national disgrace” for the nation, Australian Prime Minister Malcolm Turnbull says the ball-tampering scandal is a "shocking disappointment" and stated that he wants the game's governing body to take "decisive action" against those involved.

The futures of Test side captain Steve Smith and coach Darren Lehmann are in question after Smith admitted to being part of a plan to tamper with the ball during the third Test against South Africa at the weekend.

Cameron Bancroft used a piece of yellow tape to illegally tamper with the ball, a plan that Smith has admitted was devised by the team's leadership group during the lunch break. This group is also likely to have featured vice-captain David Warner and fast bowlers Mitchell Starc and Josh Hazlewood but, according to Smith, not Lehmann.

Prime Minister Turnbull said Australians woke up "shocked and bitterly disappointed" by the news, advising “it seemed completely beyond belief that the Australian cricket team had been involved in cheating.

"After all our cricketers are role models and cricket is synonymous with fair play. How can our team be engaged in cheating like this?

Prime Minister Turnbull said he had a "frank discussion" with Cricket Australia Chairman David Peever about the scandal on Sunday afternoon.

He advised "I have expressed to him very clearly and unequivocally my disappointment and my concern about the events in South Africa. He has said to me that Cricket Australia will be responding decisively, as they should.

"It's their responsibility to deal with it but I have to say that for the whole nation - who holds those who wear the baggy green up on a pedestal about as high as you can get in Australia - this is a shocking disappointment.

"It's wrong and I look forward to Cricket Australia taking decisive action soon."

Meanwhile, the ASC issued a statement advising “the ASC condemns cheating of any form in sport. The ASC expects and requires that Australian teams and athletes demonstrate unimpeachable integrity in representing our country.

“The Australian cricket team are iconic representatives of our country. The example they set matters a great deal to Australia and to the thousands of young Australians playing or enjoying the sport of cricket and who look up to the national team as role models.

“Given the admission by Australian captain Steve Smith, the ASC calls for him to be stood down immediately by Cricket Australia, along with any other members of the team leadership group or coaching staff who had prior awareness of, or involvement in, the plan to tamper with the ball.

“This can occur while Cricket Australia completes a full investigation.”