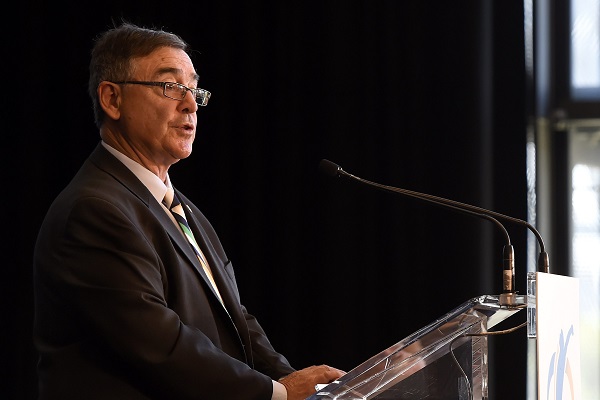 Tasker joined the Board of Paralympics Australia in 2008 and served as President from 2013 until his retirement last year.

“Everyone within our organisation is in debt to Glenn’s contribution to the Australian Paralympic movement over many years. He was a wonderful leader, colleague and friend to so many people around the world.

“His achievements as President of Paralympics Australia will leave a legacy for years and decades to come. He was able to skilfully guide the organisation through one of the most tumultuous periods in its history between 2014 and 2015, and into a new era of Paralympic sport in Australia.

“In collaboration with our Board of Directors and our staff, he delivered a sustainable plan that brought us back from the brink to a position of organisational, financial and reputational strength.

“During Glenn’s tenure, Paralympics Australia was also able to secure the Seven Network as a broadcast partner for Rio 2016 and PyeongChang 2018. As the first-ever commercial television network deals for Australian Paralympic sport, the benefits have been far-reaching, including the continued growth of our largest ever suite of corporate partners.

“All of these accomplishments mean Glenn will always hold a special place in the Australian Paralympic movement and rightfully so.”

Sport Australia and the Australian Institute of Sport also sent “their deepest condolences to the family of one of Australia’s great sports administrators Glenn Tasker”.

Sport Australia Chair John Wylie paid tribute to his tremendous legacy to Australian sport, especially his contribution to Australia’s Paralympic community, advising “over three decades as a sports administrator Glenn worked across Australian sport in swimming, tennis and Paralympic sport. His drive to improve sporting opportunities for Australians with disabilities has left an incredible legacy.

“We are seeing now increasing opportunities and recognition for Australia’s Paralympic athletes and that is because people like Glenn Tasker have made it their mission to improve the inclusivity of Australian sport. He has led the way, and we know he has inspired others to carry on his work so this progress continues.

“Sport Australia acknowledged Glenn with a Service to Sport award in 2017 - that is only a very small recognition of the enormous contribution he made to our industry.”

Glenn Tasker was acknowledged with Sport Australia’s Service to Sport award in 2017 for almost three decades of experience in sports administration.

At the start of his sports administration career, Tasker led inclusive programs for athletes with a disability. Glenn was Executive Director of Swimming NSW from 1990-98 and during that time was instrumental in introducing events for swimmers with disabilities into the NSW Age Swimming Championships – the first state championships in Australia to do so.

During his time at Swimming Australia, he assisted with establishing the swimming Paralympic Preparation Program, working with both the APC and the International Paralympic Committee (IPC) to achieve better outcomes for swimmers with a disability.

He served as Chief Executive of Tennis NSW from 2008 to 2013, before retiring from that position to dedicate more time to the Paralympic movement.

He received an Australian Sports Medal in 2000 for his sports administration career.

With thanks to Tim Mannion of Paralympics Australia.

Image: Glenn Tasker prior to the Rio Olympics.