Australian Rugby Union and SKINS support ‘Rainbow Round of Sport’ 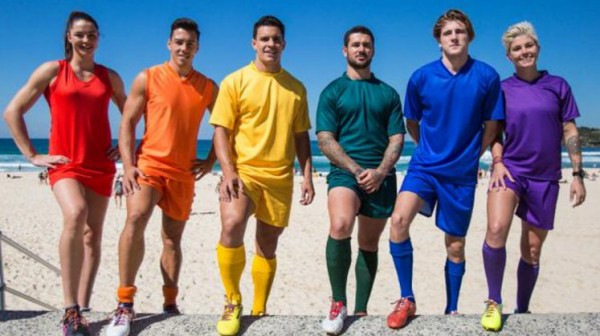 In an effort to stamp out homophobia in rugby, the Australian Rugby Union (ARU) is supporting the inaugural ‘Rainbow Round of Sport’ – being held from 31st March to 4th April.

The round sees rugby players across Australia being encouraged to support the campaign by lacing up their boots with a pair of rainbow shoelaces as a symbol of their stance against homophobia.

The Rainbow Round of Sport is an initiative between the ARU’s partner, SKINS, and Pride in Diversity. It comes after the organisers of Sydney’s 2014 Bingham Cup (the Gay Rugby World Cup) and a coalition of LGBTI sports commissioned a global research project which found that 46% of participants believed that LGBTI participants are not accepted in sporting culture (versus 1% that did).

By wearing rainbow laces and promoting the initiative, players and rugby clubs can raise awareness about homophobia in sport and show their support for the LGBTI community in Australian Rugby. The objective is to develop a safe and inclusive environment for players, administrators, coaches and spectators to participate and engage in sport regardless of their sexuality.

In 2014, Australian Rugby signed a landmark Inclusion Policy, designed to put an end to all forms of discrimination and homophobia in Rugby and ensure a positive environment for everyone involved in the game.

ARU Chief Executive Bill Pulver explains “there is no place for homophobia or any form of discrimination in rugby, and our actions and words, both on and off the field, must reflect this.

“Our Inclusion Policy signals our clear stance on homophobia in rugby. We are committed to ensuring all Australians, regardless of their sexuality, gender or background are able to enjoy our great sport equally.

“The LGBTI Rugby players in Australia are fantastic role models for thousands of men and women across the world. We were delighted when teams from all over the world visited Sydney to compete in the 2014 Bingham Cup as it generated an ongoing national conversation about homophobia in sport.”

SKINS Executive Chairman, Jaimie Fuller agreed, adding “our belief is that the only thing that should matter in sport is what happens on the field."

“We appreciate the support of the ARU for the Pride in Sport Index and the work of Pride in Diversity.

“We look forward to working with the ARU in the coming years to make #RainbowLaces an even bigger and better annual event, so we can all say #KnotMe to homophobia in sport.”

Free pairs of Rainbow Laces are available at Rebel Sport and Amart stores.

Top image: Qantas Wallabies centre Matt Toomua (third from left) helped launch the 'Rainbow Round of Sport' to boot homophobia out of rugby.