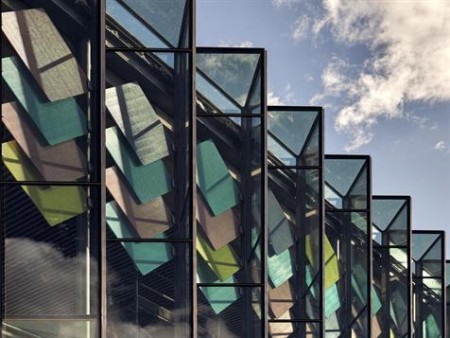 The Australian Museum has opened two new additions, marking stage one of the long-term renewal of Australia's oldest museum while also honouring the nation’s first inhabitants.

A striking new glass entry to the Museum, known as the Crystal Hall, brings visitors into the attraction from East Sydney’s William Street which, according to Museum Executive Director and Chief Executive Kim McKay, as always intended as the original entrance

The Crystal Hall, a carbon neutral structure, is the first change to the Museum's entrance in 145 years and makes it fully accessible to the public.

The transformation also pays homage to Australia's Indigenous history with engravings of fossilised footprints that were found in Lake Mungo in the Willandra Lakes World Heritage Area.

After a year and a half in the role, McKay has also presided over a dramatic turnaround in the Museum’s financial position by posting a small annual surplus, despite cuts in NS Government funding.

Commenting on this, McKay told Fairfax Media “I have turned that around in the 12 months to where we will be recording a small surplus.”

In terms of the reorientation of the Museum’s entrance, McKay said  it was an accident of history that saw the original entrance established on College Street, explaining "I read the history books and found it (the entrance) was always meant to be on William Street, so we've restored its rightful entrance onto William Street.” 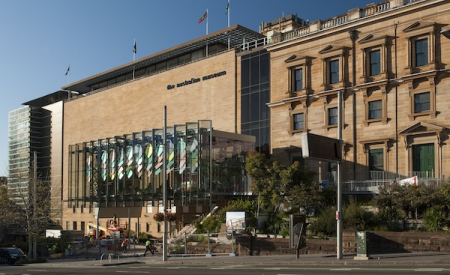 The new works are part of a larger Master Plan – a 'Vision Document' that McKay said she was delivering to the NSW Government this week for consideration.

This Master Plan moves beyond Stage Two – which entails restored gallery spaces, education facilities and new storage for the collection – to expanding the buildings footprint using the corner site at Williams and Yurong Streets.

Opening the structure, Premier Baird stated “here in Sydney at the moment we have a real revolution underway, and the arts and cultural fraternity have recognised this significant role it plays in this city, this state, and this country, and we want to do everything we can to support it.”

However, he sounded a note of caution in adding “(but) we do get nervous when we go to the openings of museums when they say, ‘It is Stage One.”

NSW Deputy Premier and Minister for the Arts, Tony Grant added “the first part of our Government was all about preparing our budget and our state, and the second vision is to transform NSW, and that needed to not be just an economic one - it needed to be about the confidence of the state and to, importantly, be about what we did in our arts and cultural space.”

The Australia-first management system used in the development was developed in collaboration between Neeson Murcutt Architects, Joseph Grech Artchitects and engineers Arup.

A solar photovoltaic system has been installed on the roof of the main museum to offset the Museum’s energy use.