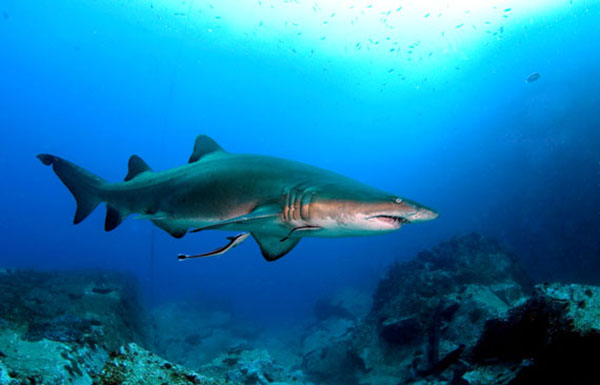 The Australian Marine Conservation Society (AMCS) and Humane Society International have condemned the lack of public consultation and decision by the NSW Government to open up Bateman’s Bay Marine Park on the NSW South Coast to fishing  - a habitat of the critically endangered grey nurse shark.

The grey nurse shark survives at ten small critical habitat sites along the NSW coastline which have been protected as part of its Recovery Plan. The key threat to the species is recreational and commercial line fishing. The sharks are hooked accidentally, and also ingest the hooks retained by their prey species. The ingested hooks have long-lasting lethal and sub-lethal impacts, including septicaemia and an inability to reproduce[1].

NSW Fisheries Minister Adam Marshall has announced that five protected zones in the Bateman’s Bay Marine Park will be opened up for fishing, including the sanctuary zones of Montague Island. Sanctuary zones on the eastern and southern side of the island are critical habitat for the grey nurse shark and will now only be protected for six months of the year, leaving them exposed for the remainder.

The announcement comes just days after an independent report revealed that the grey nurse shark is among 11 threatened shark species in Australia that have not shown recovery despite their protection under law.[2]

“The species will never have any hope of recovery if key threats are allowed to operate in critical habitats. We must provide a sanctuary from hooks from which the species can rebuild.

“The decision to weaken protections for grey nurse shark in the Bateman’s Bay Marine Park without public consultation sidelines the wishes of everyone who is concerned about and cares deeply for the ecological health of our state’s marine life.

The east coast population of grey nurse sharks is listed as critically endangered, after catastrophic population declines in the 1960s that have been described as ‘quasi-extinctions’. Grey nurse sharks face the real threat of extinction as they reproduce very slowly, giving birth every two years to only two pups.[3]

The latest research indicates there are as few as 2167 grey nurse shark adults remaining on the east coast.[4]

Dr. Leonardo Guida, shark scientist and spokesperson at AMCS advised “Grey nurse sharks come together, live and breed at distinct aggregation sites along Australia’s east coast. With as few as 2100 adults remaining on the east coast and a handful of known aggregation sites, it is unequivocal that these critical habitats provide as much sanctuary as possible for the species to recover.”