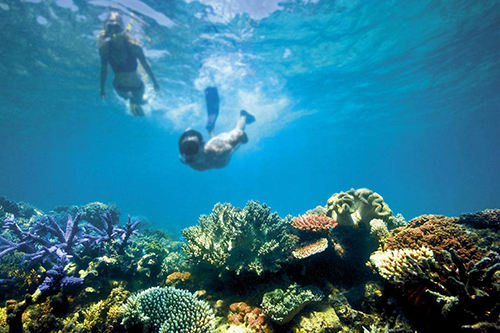 The AMCS said the announcement from Labor Leader Bill Shorten to terminate the grant to the Great Barrier Reef Foundation was welcome because it would put public money back into the hands of publicly-funded agencies with science-backed expertise.

Imogen Zethoven, AMCS strategic director, said: “We would also urge Labor to seek advice from GBRMPA, as the lead government agency for the Reef, on how these funds should be allocated.

While Shorten said climate change was the biggest risk to the Reef, Labor’s announcement that it would “limit global warming to well below 2 degrees Celsius above pre-industrial levels, in line with the goals of the Paris Accord” was not enough to protect the future of the Reef.

In a 2017 GBRMPA submission to government, the agency said that “predictions indicate even 1.5 degrees Celsius of warming above pre-industrial poses substantial risks to coral reef ecosystems.”

Zethoven said that more recently, reports that GBRMPA had prepared a position statement on climate change show the agency’s advice remains that keeping global temperature rises to 1.5C or below will be critical to maintaining the ecological function of the Great Barrier Reef.

She added: “If we are to have a Reef to pass on to the next generation, then doing our bit to achieve that 1.5C goal must be the policy of the next Australian government.

“We must Stop Adani, stop new fossil fuel projects and transition to 100% renewable energy by 2030 to give the Reef a fighting chance and safeguard the 64,000 tourism jobs that depend on it.”

AMCS is asking all parties for policies that will deliver "cooler and cleaner oceans" and the group will publicly release an election scorecard to help voters in the weeks before the vote.