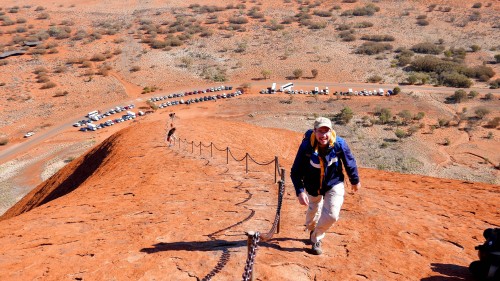 A man suffered a cardiac arrest yesterday while halfway up climbing Uluru with a tour group - only being kept live after the intervention of paramedics and off-duty police officers who used a defribrillator.

ABC reported that two paramedics who were travelling spotted the incident and proceeded to climb the rock to help by providing medication and organising medical assistance, while two miners who were trained to perform vertical rescues immediately performed CPR.

Two off-duty police officers who were also on the scene managed to get a defibrillator to help keep the 64-year-old man alive.

The climber was then transferred onto a stretcher before being taken back down by the rock using aeries of ropes and pulleys in a two-and-a-half-hour effort.

If not for the people around him the man would have become the 38th person to die on Uluru since records began, the most recent being a 76-year-old Japanese man who collapsed and died from a heart attack while trying to ascend the steepest part of the rock in July 2018. Prior to that, a 54-year-old Victorian man died in 2010 and another Japanese tourist died in 2008. Three men also got stuck on Uluru in 2016 after straying from the designated path, requiring a huge rescue effort.

Traditional owners, the Anangu people, have been vocal about their wishes for people not to climb Uluru since the 1980s not just because of its spiritual significance but also the physical dangers of the climb.

According to Steven Schwer, Chief Executive of Tourism Central Australia, Uluru is currently experiencing a boom in tourists hoping to climb the rock before a ban is enforced on 26th October 2019 due to safety and environmental concerns, as well as the landmark’s cultural significance to the traditional custodians of the land, the Anangu people.

Noting that current climb conditions would remain in place until the full ban comes into effect on 26th October, Parks Australia advised in a statement "the park's traditional owners, Anangu, feel a responsibility to look after all visitors whilst they're on their land so when someone is injured or becomes unwell on the climb they are greatly saddened, as are all Park staff."

Parks Australia said visitor numbers to Uluru-Kata Tjuta National Park have been steadily increasing for the past six years, with a 22% increase in 2018. However, according to their 2018 visitor survey, 87% of visitors said they did not climb Uluru and 80% of visitors support the Board's decision to close the climb permanently.

Image of Uluru climbing used for illustrative purposes only.