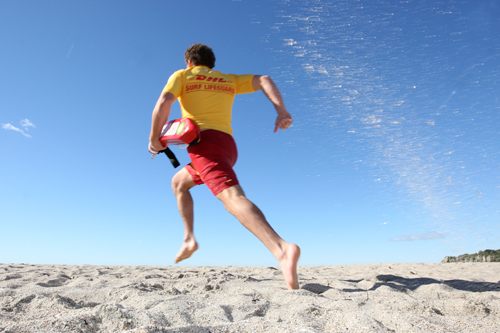 Hundreds of Japanese die every year in the surf, the result of excessive alcohol consumption, ignoring safety rules and swimming in dangerous areas.

Following Australians having helped to set up surf lifesaving associations in Indonesia, Peru and Taiwan, two lifesavers from Maroochydore have travelled to Shimoda in central Japan to help train local volunteers.

Beau Farrell, a former champion board rider, is happy to share his knowledge, explaining "the main reason behind it was to help improve our sister club, Shimoda's, board paddling, swimming and ski paddling ability.

"It's mainly some minor, sort of, technical issues that we're helping ironing out and to get them performing at their best."

Hundreds of Japanese swimmers drown in the surf every year but there is a feeling that many fatalities could be prevented if life guards received more rigorous training and the public was more aware of the dangers.

Nakayama recently told the BBC "there are still many people who drown. Around this area five people died last week in the surf.

"Among them were people swimming at beaches with no lifesavers. Lifesaving still isn't widespread in Japan, so we need to work harder here."

Australia's surf lifesaving expertise is built on traditions that go back more than 130 years during which time they have recorded more than 400,000 rescues.