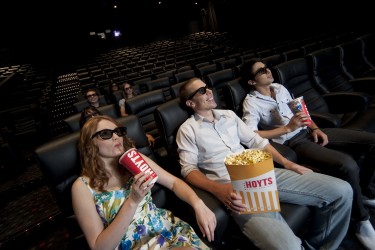 Australian cinemas have recorded a significant surge in ticket sales in the first half of the year with takings up 16% in the first six months.

While distributors predict a record year, industry analysts have been surprised by the rise in box office takings given that many of the top-earning movies released in the first half of 2015 have been familiar-sounding sequels and comic book adaptations.

In addition, standard ticket prices have steadied at around $20, illegal downloading of movies and TV shows is widespread and new streaming services are making ever more films and quality TV series available at home.

In the past four years, admissions - the industry term for cinema visits - have steadily fallen by 15%.

But distributors say a wide range of appealing movies has drawn different audiences back into cinemas this year.

In addition, Jurassic World is fast approaching $50 million as it becomes a runaway global blockbuster.

With no movie in Australian having topped $40 million last year, three have already exceeded that earnings target already this year.

Universal Pictures Australasia Managing Director Mike Baard told the Sydney Morning Herald “there's been a combination of fantastic (movies) and it's resulted in many markets around the world seeing significant upswings.

"Australia is even more pronounced (with movies in) pretty much every genre having worked."

Baard believes continued improvements to cinemas have made patrons happy to pay $20 to $25 to watch a movie on a giant screen or $40 for a more comfortable Gold Class style experience.

He added “the decline in admissions is built around people choosing to see fewer 'softer' movies but (they) are willing to pay a little bit more to see movies on a Vmax or Gold Class screen with 3D."

Sony Pictures Releasing, Managing Director Stephen Basil-Jones, attributes a "very strong" six months to the range of choice for movie-goers, stating "I still think we need to be a little more original but then someone makes Jurassic Park again and there goes the argument."

Cinema executives are confident about a record year given three big movies that will open before Christmas - the James Bond movie Spectre, the final Hunger Games instalment and Star Wars: The Force Awakens.

Basil-Jones added “there's not a weak month looking ahead from now.”

Art-house cinemas have also had a strong six months.

Palace Cinemas Chief Executive Benjamin Zeccola said business at most of its venues was up 10% on last year.

Zeccola told the Sydney Morning Herald "it's been a really good run with The Second Best Exotic Marigold Hotel and Woman In Gold, stretching back to the start of the year with The Imitation Game and Birdman.

"And in between there's been Cinderella, Mad Max and American Sniper. It's been a really good run of quality films."

Zeccola said festivals and remastered versions of classic movies have been thriving, with the female audience continuing to drive ticket sales.

He added “females seem to be the decision-makers in deciding what to see ... for us, it's the mature female market.

"That's why films like Exotic Marigold Hotel, Woman In Gold and Far From The Madding Crowd are proving so popular. They're targeted towards what for us is the largest market."