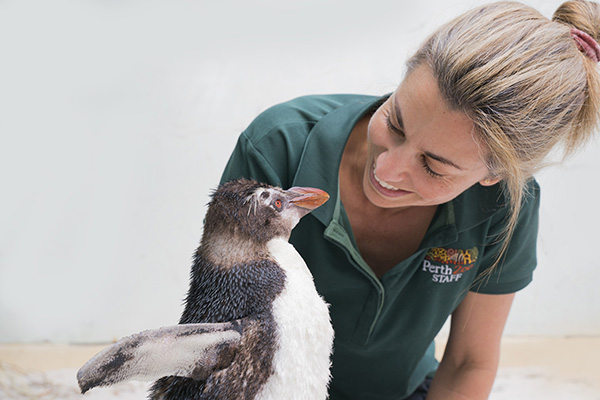 On Penguin Awareness Day, 20th January, a number of Australian wildlife attractions consider the plight of the world's penguins, as well as focus on the conservation of their habitats, both on land and at sea.There are 18 different penguin species around the world and 11 of these are vulnerable or endangered due to human impacts such as climate change, overfishing, plastic pollution, invasive species and habitat degradation.

Australia is home to just one species of penguin — the Little Penguin — but other species sometimes visit our shores - larger penguins with bright-yellow crests: Rockhopper (both Northern and Southern), Royal, Macaroni, Fiordland, Snares and Erect-crested Penguins, each originating from subantarctic islands — have all been recorded along Australia’s southern coastline, often arriving in February and lingering till March.

Australian Birdlife magazine talks about these other species of itinerant penguins arriving as vagrants. These penguins might be seen on beaches anywhere from Western Australia to Victoria and Tasmania. In south-eastern Australia, a penguin on the beach will probably have originated from breeding colonies on subantarctic outcrops such as Macquarie Island or any of New Zealand’s outlying islands, while penguins found along Western Australia’s coast are more likely to have swum from Heard Island or other subantarctic islands thousands of kilometres to the south-west of Australia.

And if they’re here in February or March, they’re usually seeking refuge on a quiet beach to undergo a moult of their feathers.

Northern Rockhopper penguins are endangered. The global population is thought to be less than 240,300 breeding pairs and has declined by 60% in the past four decades. Approximately 85% of the species’ population is found in the South Atlantic Ocean and breeds at the Tristan da Cunha archipelago.

Pierre made news headlines earlier in 2020 due to him facetiming with other Rockhopper Penguins while being treated at Perth Zoo’s wildlife hospital.

Being the only Rockhopper Penguin in Australia, the novel enrichment activity ensured that Pierre could still see and hear other penguins. This resonated with people all over the world who were separated from friends and families or in isolation due to the global health crisis.

Perth Zoo Senior Veterinarian, Alisa Wallace, said “Pierre came into our care due to issues with his feathers not moulting properly. It is what we call ‘arrested moult’ and means the penguin is not waterproof and unable to swim and fish for themselves.

“We’ve been fattening him up and giving him all the nutrients and care he needs promote feather growth; however, it is an issue that can take multiple moults and some years to rectify.

“Knowing that Pierre would need extra TLC for some time, our aim has always been to get him fit enough to be able to travel to another conservation zoo which has Rockhoppers so he could be with other penguins.

“His welfare is our priority, Pierre is very social, and we know he will thrive being amongst other penguins.”

Northern Rockhopper penguins are endangered. The global population is thought to be less than 240,300 breeding pairs and has declined by 60% in the past four decades. Approximately 85% of the species’ population is found in the South Atlantic Ocean and breeds at the Tristan da Cunha archipelago. 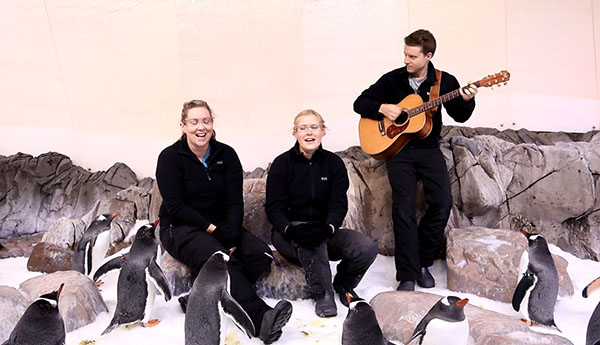 Sub-Antarctic King and Gentoo penguins were treated to a private performance by SEA LIFE Melbourne Aquarium keepers to mark the importance of Penguin Awareness Day.  Lauren and Taylor, who both moonlight as semi-professional singers, chose the popular Australian songs 'You’re the Voice' by John Farnham and 'Horses' by Daryl Braithwaite to pique the interest of the playful penguins. They were joined by Lauren’s performing partner Kieran McNamara on guitar.

SEA LIFE Melbourne Aquarium highlights the significance of Penguin Awareness Day in raising the awareness of the plight of penguins in the wild and the need for their protection. There are 18 different penguin species around the world and 11 of these are vulnerable or endangered due to human impacts such as climate change, overfishing, plastic pollution, invasive species and habitat degradation. People can make a difference by eating sustainable seafood, being responsible with their rubbish and keeping a safe distance from wild penguin habitats.

Visitors to SEA LIFE Melbourne can see the King and Gentoo penguins in action and learn more about these fascinating flightless birds.
For further information  on opening hours and ticketing go to visitsealife.com/melbourne 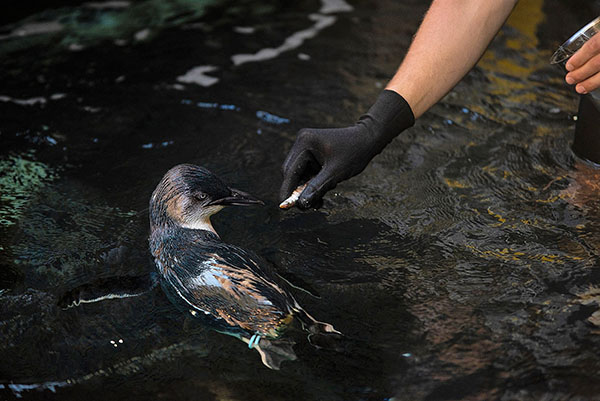 SEA LIFE Sunshine Coast Aquarium is celebrating Penguin Awareness Day by announcing the launch of a second Penguin Encounter, which will be available in February 2021.

The new experience will give visitors the opportunity to stand in the water and hand feed the Little Blue Penguins while they swim around your legs. Guests will stand on a platform submerged in the penguins’ pool as they feed the birds.

The new In-Water Penguin Encounter is available for guests aged 13+ and includes a behind the scenes tour of the penguin zone so guests can discover how the team cares for the penguins and learn how to help protect the species in the wild.

SEA LIFE Sunshine Coast Mammals Manager, Carla Haskell notes “Penguin Awareness Day is the perfect opportunity to announce the launch of our brand new In-Water Penguin Encounter, which will give our guests the opportunity to get even closer to the Little Blue Penguins while they do what they do best! Guests will be right in the action as the penguins swim, splash, dive and eat in the water, which is where they spend most of their day.

“Guests will be able to meet some of the wonderful birds here including Ash the rescue penguin. Ash has been with us for almost a year after she was found waddling along Currimundi Beach in February 2020 suffering from malnutrition, feather damage and foot injuries. The presence of a little penguin on the Coast was a bit of a surprise as this species is native to the coastlines of Australia’s southern states. We are very happy to report that Ash’s health has improved dramatically over the last 12 months – she has grown new feathers, displayed mating behaviours and integrated well with the other birds. We are happy that Ash will be staying with us here at SEA LIFE Sunshine Coast for the foreseeable future.”

The original Penguin Encounter, which allows guests to hand feed the penguins on the sand rather than in the water, is still available to guests aged 5+. This experience costs $104 per person (including admission). There is a dedicated photographer to perfectly capture guests’ experience with the penguins during both encounters.

All visitors to SEA LIFE Sunshine Coast must pre-book their tickets online in advance. Visit www.sealifesunshinecoast.com.au for bookings, opening hours and health and safety information. 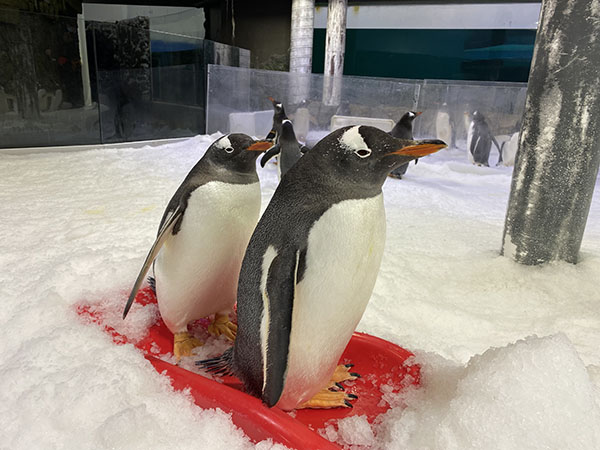 The Darling Harbour aquarium has put a call out for the public to help name the chick of the world’s most famous gay penguin couple - Sphen and Magic - and win the chance to meet the penguin family inside the Sub-Antarctic Zone.

Sphen and Magic went viral in 2018 when the male-male couple successfully adopted and incubated an egg at SEA LIFE Sydney Aquarium. The hatched chick was named Lara by its Penguin Carers but nicknamed by the public as SPHENGIC after her parents.

The duo reunited in 2020 to set up a nest and adopt their second egg, which successfully hatched in November 2020. The second child’s arrival went viral in the same month, along with the news of six other Gentoo Penguin chicks hatching at the aquarium during the same breeding season.

The genders of the seven chicks are still unknown. Gentoo Penguins, as well as other penguin species, do not carry their sexual organs externally. Tests are conducted by aquariums to determine their sexes.

SEA LIFE Sydney Aquarium’s Penguin Supervisor, Kerrie Dixon advised that with the baby chicks now just as big as their parents they need names “we thought the best way to celebrate Penguin Awareness Day is to give Sphen and Magic fans around the world the chance to name their second chick.”

With penguins carrying their sexual organs internally, meaning gender is not an important construct when naming the chicks,  SEA LIFE Sydney Aquarium gives them identities based on their personalities.

According to the aquarium’s team of Penguin Carers, Sphen and Magic’s second chick not only had the biggest egg, but is the largest of their chicks – “it’s brave, bold and loves food.”

Name suggestions can be submitted on the SEA LIFE Sydney Aquarium website explaining your choice in 25 words or less.

The competition is open to anyone and everyone around the world – borders do not apply when it comes to Sphen and Magic.

The winner will receive a penguin birth certificate PLUS the chance to go where very few have gone before – inside the Sub-Antarctic Zone to meet and snap selfies with Sphen, Magic and their chick. Those based in NSW will physically be invited on the ice and those living outside NSW and beyond Australia will be dialled in for a special private Zoom call with the famous family.

The competition closes at 11.59pm AEST on Tuesday 26th January 2021 with the winner and the winning name selected and contacted on Wednesday 27th January 2021.

For more information go to visitsealife.com/sydney/