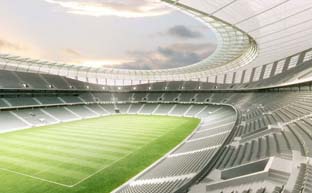 Australian architects Peddle Thorp have been the design force behind one of India's first eco-friendly sports venues, the Thyagraj sports complex.

Recently opened by Delhi Chief Minister Sheila Dikshit, the cutting edge stadium will be the venue for netball, basketball and table tennis at the upcoming Commonwealth Games in New Delhi in October.

Peddle Thorp design director Peter Brook explains that the building encompasses the latest green technologies within tight space constraints, stating "the design challenges have been immense and have included many green features. The building contains an integrated building management system for energy efficiency."

The stadium has been constructed using fly-ash bricks and boasts features such as recycled water, rainwater harvesting. It aims to leave a smaller carbon footprint.

A piped natural gas turbine generates 3.5 megawatts required to power the entire stadium. Solar power is also being used for lighting with the roof of the stadium generating 1 MW of energy, which will be used for the building and to even push power into the grid.

Brook is proud that a Melbourne company is competing on the world stage and winning contracts of this type.

Aside from venues throughout Melbourne, it has also designed the Pisa Multipurpose Stadium in Penang and the award winning Teda Soccer Stadium near Beijing.

Peddle Thorp is one of Australia's major architectural practices. It has a strong and successful record in sporting venues having designed Vodafone Arena and Rod Laver Arena in Melbourne as well as Skilled Stadium in Geelong.

Its folio of work now ranges from art galleries to aquariums, sporting stadiums to streetscapes, hospitals to hotels, and residential interiors to retail developments.