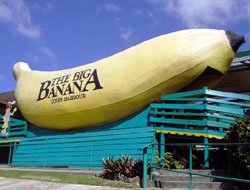 Among Australia’s many ‘big things’, The Big Banana at Coffs Harbour is perhaps the most famous of all, and a former Coffs Harbour resident and adjunct Southern Cross University professor has a simple message for local residents - embrace your big thing.

Now resident in Finland, Professor Johan Edelheim has recently returned to Australia to launch his book, Tourist Attractions: From Objective to Narrative.

Featuring The Big Banana on the cover, Professor Edelheim explains “the book is loosely based on my PhD thesis, The Big Bushranger and The Big Banana, and analyses the experiences of two different tourist centres - Uralla and Coffs Harbour.

"Uralla is home of Captain Thunderbolt and is a place that's embraced bushranger tourism and Australian heritage.

“On the flipside, there's Coffs Harbour and The Big Banana, which is a bit retro and kitsch."

Professor Edelheim’s book examines how tourist attractions draw crowds, how they are perceived, and their wider cultural significance.

He states “The Big Banana is really, really famous for tourists but it's a bit of an embarrassment for the locals.

"This is sad because to a large extent The Big Banana is Coffs Harbour's identity and if the locals would learn to laugh with tourists rather than think the tourists are laughing at them it would be so good.

"There's a lot of agriculture in the region and from a tourism perspective they're not taking advantage of this.

"Locals should be having a bit of fun with the banana and capitalise on its kitsch. There's a lot of money to be made in the retro market."

Professor Edelheim explains that one of the key aspects of his book was on regional identity and the role of visitor attractions, stating “it seems like Coffs Harbour is constantly trying to reinvent itself to be anything but the Big Banana when in reality they need to embrace it and capitalise on it."

"It is a joke, it's a huge concrete structure and just like so many other jokes we need to understand how fun it is for others."

"The fun of the banana is never embraced."