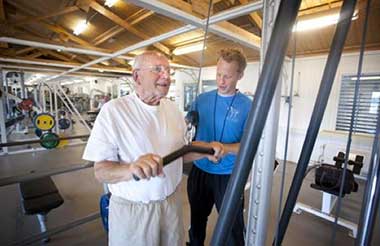 Australia has been ranked worst among 112 countries assessed for performance in addressing one of the four big risk factors for chronic disease – physical inactivity.

A just released study in the prestigious British medical journal The Lancet has today (24th April) published report cards on the performance of more than 100 nations found that only 43% of adults are active enough for good health.

One of the world’s leading experts in the area of physical activity and Observatory member, Professor Adrian Bauman of Sydney University, said that, with an ageing population, chronic disease was Australia’s greatest health challenge, contributing to 90% of all deaths.

And while Australia is doing well in efforts to tackle some risk factors, such as reducing smoking, more could be done to help Australians to move more and sit less.

Professor Adrian Bauman stated "physically inactive Australians are setting themselves up for a life plagued with health issues.

“Physical inactivity is a major modifiable risk factor in its own right, ranked up there with high blood pressure, smoking and overweight and obesity in terms of the contribution it makes to the total burden of chronic disease in this country.

“Conversely, being active directly reduces your risk of a range of chronic health issues, such as heart disease, stroke, type 2 diabetes and some cancers.

“The publication of these report cards confirms that Australia is facing an epidemic of sedentary behaviour." 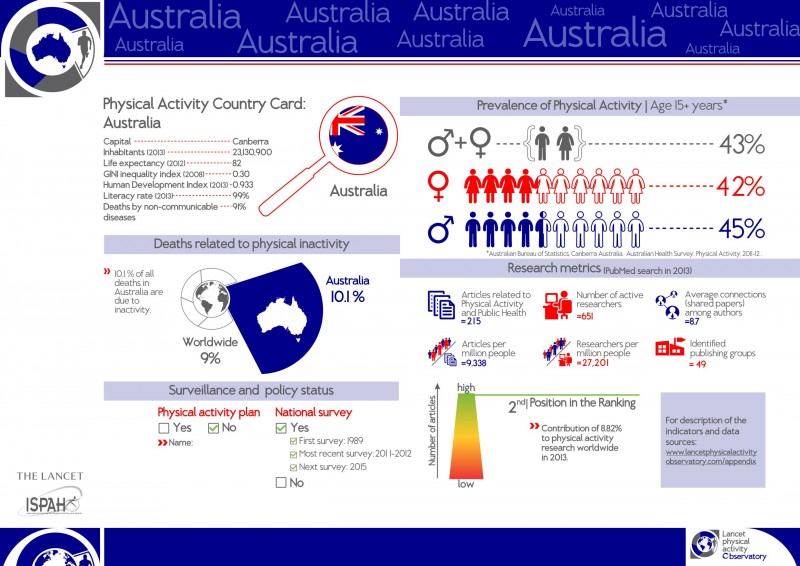 The report stated over five million deaths per year are due to inactivity, ranging from one% to 19% of all deaths in different parts of the world – and 10.1% of deaths in Australia.

It also showed that physical inactivity is highly prevalent in all regions of the world, in rich and poor countries.

Shilton stated "it’s causing an estimated 14,000 (more than 10% of the total) deaths and costing the health budget an estimated $1.5 billion ever year.

“We are fortunate to have some of the world’s leading experts working in Australia. This new research ranks Australia second in the world in terms of a research output and yet we still don’t have a national plan for physical activity."

Shilton concluded "the time has come for Australia to develop a national physical activity action plan that can help get people moving more and sitting less.

"The Heart Foundation has helped pave the way for a national plan, releasing a revised Blueprint for an Active Australia late last year with 13 key areas that need attention.

“The message is simple; we need to encourage everyone, even from an early age, to move more and sit less.

"For this your heart and health will thank you."

The full report and further information can be found at www.lancetphysicalactivityobservatory.com

15th May 2013 - Massey University researchers to study exercise in children