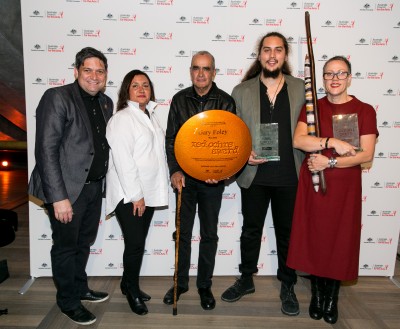 Presented on Wednesday 27th May at a ceremony at the Sydney Opera House, the annual awards celebrated the work and contributions of four exceptional Indigenous artists.

The prestigious national awards consist of the Red Ochre, two Fellowships and the Dreaming Award.

This year the Red Ochre, Australia’s most esteemed peer-assessed award for an Indigenous artist, was presented to prominent artist, activist, intellectual and educator Dr Gary Foley.

Awarded since 1993, the $50,000 prize acknowledges an artists’ outstanding contribution to and lifetime achievement in Aboriginal and Torres Strait Islander arts at a national and international level.

The Dreaming Award provides $20,000 to an artist aged between 18 and 26 to create a major body of work through mentoring or partnerships. It will be awarded to singer-songwriter and front man of The Medics, Kahl Wallis.

Australia Council Chair Rupert Myer said it was a pleasure to once again be part of the awards, which are the highest acknowledgement an Australian Indigenous artist can achieve for their artistic achievements.

Myer explained “the awards draw attention to the significant contribution Indigenous artists make to the artistic vibrancy and cultural life of Australia.

“They encourage us to experience, participate in and cherish the dynamic work that is created across Australia.” 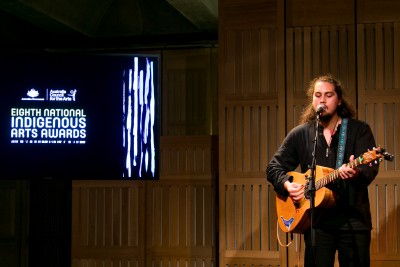 Buckskin stated “Gary Foley has been at the forefront of Indigenous arts, beginning with his acting debut in the revue Basically Black in 1972, various films and television series.

“He has left a lasting legacy across Australia’s cultural and political landscape and is in the unique position of not only being part of history but also shaping it. He also helped establish Redfern’s Aboriginal Legal Service, the Aboriginal Medical Service in Melbourne and in 1983 was the first Aboriginal Director of the Aboriginal Arts Board of the Australia Council.

“In 2004 after a stint as Senior Curator for Indigenous Cultures at Museum Victoria, he successfully entered academia as a senior lecturer at the University of Melbourne and Victoria University.

“He suffered a serious heart attack two years ago and despite ongoing poor health he was this year promoted to Associate Professor in History at Victoria University where he continues to teach and conduct a major research program.

“Gary has led an extraordinary life, which began in northern NSW, where he was expelled from school at 15, to receiving the University of Melbourne’s prestigious Chancellor’s Award for Excellence in 2014 for his PhD in History.”

Buckskin said Brenda L Croft was an award-winning artist who had been an influential part of the contemporary arts and cultural sectors for three decades as an arts administrator, curator, academic and consultant.

She added “Brenda’s two-year fellowship project, Solid/shifting ground, is an experimental, multi-media collaborative art project, building on her research into her Northern Territory homelands of Kalkarindji and Daguragu, which she first visited and created work about 25 years ago.

“The work reflects her mixed heritage - Gurindji/Malngin/Mudpurra on her father’s side and Anglo-Australian/Irish/German heritage on her mother’s - and includes audio, film and stills from local sites and personal memories of the journeys of her father and his contemporaries from the Stolen Generations.”

Reko Rennie is enjoying success both domestically and overseas after unveiling work this month at the 56th Venice Biennale in the exhibition Personal Structures - Crossing Borders. His work also features in Indigenous Art: Moving Backwards into the Future currently showing at the National Gallery of Victoria. Ms Buckskin said his Fellowship project would involve hand-painting a 1970s Rolls Royce and filming a video narrative around North West NSW towns to accompany it.

Buckskin explained “the Rolls Royce will feature three symbols – a crown, symbolising the sovereign status of Aboriginal people as the original inhabitants of Australia; a diamond, which represents a family crest and Reko’s connection to the Kamilaroi/Gamilaroi people; and the Aboriginal flag to pay respect to all Aboriginal people.

For his Dreaming Award project, singer/songwriter Kahl Wallis will work with family members in Cairns to explore his family heritage. Here he aims to record his first full-length solo album, infused with traditional language, songs and stories, and make an accompanying documentary about his journey exploring his family roots

The National Indigenous Arts Awards were established by the Australia Council’s former Aboriginal and Torres Strait Islander Arts Board, consisting of leading Indigenous artists, curators and arts managers, to recognise the outstanding work and achievements of their fellow artists. The awards are decided by a national panel of Indigenous arts peers from each state and territory, including the Torres Strait.

The prestigious Red Ochre Award has been awarded since 1993 for lifetime achievement to an outstanding Aboriginal and Torres Strait artist. The Dreaming Award, for a young Indigenous artist, was first awarded in 2012 to playwright Nakkiah Lui. Photographer Rhonda Dick received the award in 2013 and multimedia artist Tyrone Sheather in 2014.