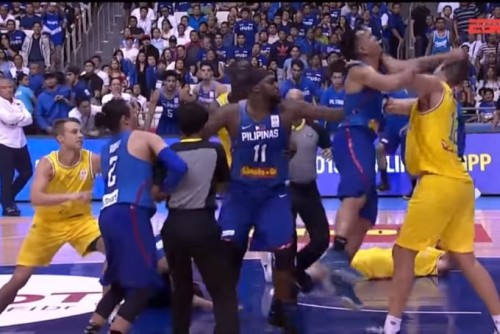 Basketball officials from Australia and the Philippines have issued a joint apology for Monday's shocking events during the FIBA Basketball World Cup 2019 Asian qualifying clash between the two nations, saying they “deeply regretted the events that took place”.

The joint statement from Alfredo S. Panlilio, President of Samahang Basketball ng Pilipinas (SBP) and Ned Coten, President of Basketball Australia advised “we deeply regret the events that took place during the game. The actions displayed have no place on any basketball court.

“We wish to apologize to the entire basketball community worldwide - and in particular to our fantastic fans in the Philippines and Australia - for the behavior displayed by both teams and for bringing the game of basketball into disrepute.

“We fully accept our responsibility and are collaborating in the ongoing proceedings to investigate the incidents.”

While Panlilio and Coten advised they “will do everything in our power to prevent this from happening again”, the statement is unlikely to soften the penalties expected to be handed down by the International Basketball Federation (FIBA).

Players from Australia and the Philippines are facing long bans over their involvement in what has been dubbed a “basket-brawl”.

Philippines players and officials are set to bare the brunt of the penalties, but Australian players Daniel Kickert and Thon Maker are also expected to be penalised.

Image shows the brawl between Philippines players and the Boomers earlier this week.