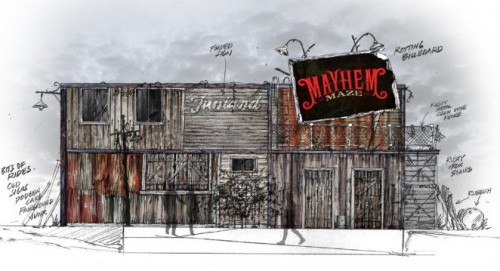 Situated on the hill beside the popular Ballroom Blitz attraction, the double storey haunt maze has been elaborately themed to resemble an abandoned warehouse that was part of a once thriving 1950s carnival.

Within, guests hunt for a clown responsible for the disappearance of countless people while he was a performer in the carnival with the attraction full of gory surprises.

The new haunt maze featured more than a dozen actors as of its opening, although it is not known whether the attraction will be manned during quieter periods.

Aussie World Chief Operating Officer, Aaron Flanagan, said it had been a long-held desire for the owners to create a permanent scare attraction at the popular Sunshine Coast theme park.

Flanagan stated “after seeing other parks around Australia and overseas enjoying great success with horror mazes, it was decided that now was a great time to invest and add even more depth to the entertainment offering within our park.

“Aussie World is continually looking for new and exciting ways to expand our park and this maze is a thrilling new direction for us.

“In addition to the Mayhem Maze, two other brand new family rides are set to open this year.”