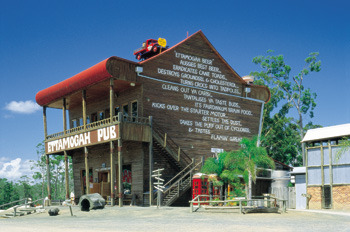 The Ettamogah Pub brand at Aussie World on the Sunshine Coast is no more, with the theme park having handed in the licence for the Ettamogah name.

The pub continues to operate and currently retains its signature look, but no longer displays its former name.

Explaining the change, Aussie World General Manager David Thompson said the licence for the Ettamogah name had been "handed in" to pursue an opportunity to build a bigger and better brand.

The change of identity effectively means that businessman Leigh O'Brien, who holds the licence for the Ettamogah concept created by the late cartoonist Ken Maynard, will no longer be entitled to any royalties.

The rights to royalties were the subject of a court decision in 2012 which found O'Brien's company, Southern Cross Equity, was not entitled to more money after Aussie World extended the pub.

Thompson has suggested that a new design and concept for the pub is currently being worked on, with a new brand to be revealed in the near future.

Thompson told The Sunshine Coast Daily that the removal of the Ettamogah name had not affected business.

The Con-X-ion service picks up from homes, motels and resorts, bringing guests to Aussie World for a day of fun.

All transfers to Aussie World can be made via www.cxn.com.au