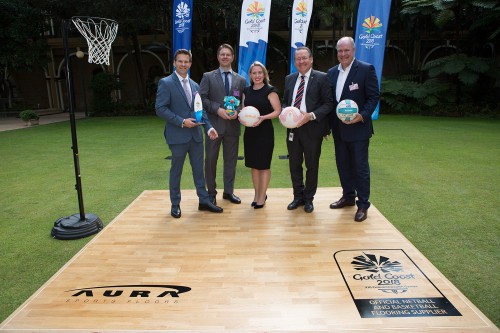 Brisbane-based sports flooring company Aura has been named as an official partner of the Gold Coast 2018 Commonwealth Games (GC2018).

Announced last week by Queensland Commonwealth Games Minister Kate Jones at a function at Parliament House in Brisbane, Aura is the newest supplier to join the Games family – as Official Basketball and Netball Flooring Supplier.

Minister Jones gave the seal of approval to the family-run and owned company, stating “Aura has a proud heritage, having operated in Queensland for 30 years - celebrating their 30th year this year, and it’s great to welcome another Queensland business success to the GC 2018 family.

“They join a long list of local businesses that are working hard to help us achieve Queensland’s greatest ever sporting success story.”

For the Games, Aura will also build over 10,000 metre² of wooden sports floors at the Coomera Indoor Sports Centre and the Gold Coast Convention and Exhibition Centre - the basketball and netball venues for GC2018.

Minister Jones added “Aura has a good track record having already delivered the infield at the Anna Meares Velodrome, which has opened the way for a range of sports other than cycling to be played there long after the Games.”

Aura Managing Director Ari Jelekainen said the company has been delivering sports flooring to elite and community venues for three decades, explaining “we’ve invested in strategic alliances and partnerships with the world’s leading manufacturers, to ensure that Australia is provided with cutting edge technology.

“Aura has a team of 20 full time staff with half to work directly on the Games. We’re all really looking forward to being a part of GC2018 and displaying our products on a global stage.

“We’re hoping our sports solutions gives the Australian basketball and netball teams that little extra bounce and spring to bring home the Gold.”

Aura Founder, Kari Jelekainen added “when I moved to Australia from Finland, I found this to be a very welcoming country full of opportunity and diversity.

“It was in Australia that I started this business, met my wife and started a family. Now that I am retired, I am very proud to see that my sons have the same passion for this industry and have chosen not only to stay in, but to grow the family business, to greater heights than I had ever dreamt possible.”