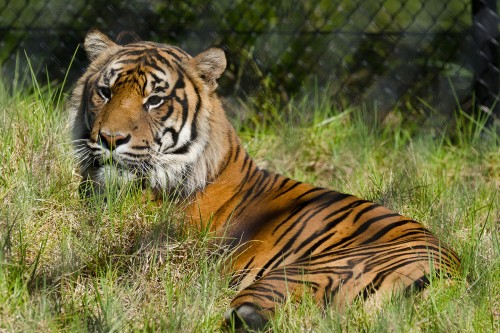 Two young Sumatran tigers from Auckland Zoo fly out to Australia this afternoon as part of an international conservation breeding program to assist this critically endangered big cat.

Two-year-old male Jalur and his female sibling Cinta, along with their brother Berani, became the first tigers ever to be bred at Auckland Zoo when they were born in June 2008. Jalur and Cinta are relocating to the Symbio Wildlife Park near Wollongong.

The pair will travel in the hold of a Boeing 763. Their keeper, Sandra Rice, who has played a key role in crate training the cats to prepare them for their journey, will settle them in for their flight and travel on the same aircraft with them. The two siblings will be quarantined at Mogo Zoo for 30 days before their move to Symbio Wildlife Park.

As Rice explains "it's tough seeing these gorgeous cats leave us - they're both great natured animals. Along with all those Zoo visitors who have followed them closely growing up, we are really going to miss them. However, the bigger picture of these tigers being able to, in time, go on to breed, and continue to progress their role as advocates for tigers in the wild, is what our efforts are all about.

"It's hugely satisfying to have reached this milestone."

Jalur and Cinta are the offspring of first-time parents, female Molek' and male Oz - who has contributed a valuable new bloodline to the Australasian region. Worldwide, there are fewer than 160 Sumatran tigers in zoos and less than 400 remaining in the wild.

Auckland Zoo's Conservation Officer, Peter Fraser explain "the captive population of Sumatran tigers has never been more important as conservationists and officials struggle to protect the few remaining wild animals and their habitat. Key tiger habitat continues to be deforested to meet the unsustainable demand for both the palm oil and paper industries.

"Recent WWF camera footage of illegal forest clearing in Sumatra's state forest, Bukit Batabuh in Riau Province - prime tiger habitat - highlights the pressure these animals are under. Numbers are so precariously low that such activities may be the last straw for this species in the wild."

For more information go to www.aucklandzoo.co.nz/