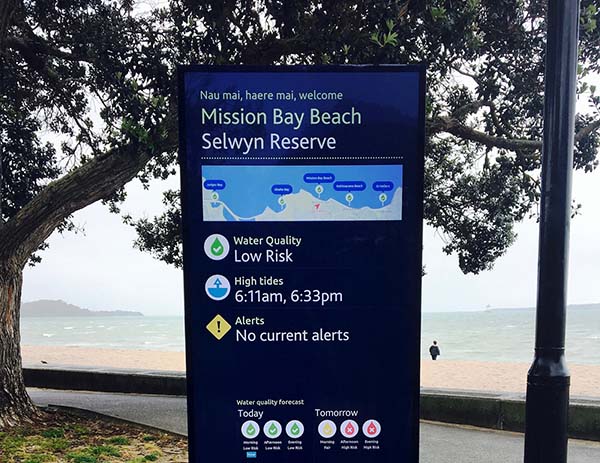 Two summers ago, with the introduction of Auckland Council’s Safeswim programme, Aucklanders received the news their beaches were not up to an acceptable standard for swimming.

Since then, the Safeswim monitoring programme has improved the monitoring system that collects and models data for water quality, enabling beach-goers to receive up-to-the-minute information on swimming spots, so good decisions can be made about where to swim.

Since 2017 the programme has increased the number of locations on the Safeswim website from 92 to 108. Over the next 18 months, Safeswim will be working towards exceeding 200 monitored sites, including freshwater swimming spots.

Over the course of the last summer four sites, traditionally with long-term warnings in place, had them removed. However, an additional long-term warning for Oakley Creek Waterfall has been added to the Safeswim website.

During the last swimming season of 2018/2019, the percentage of Auckland beach availability averaged 83% compared with 77% in the 2017/18 summer. The increase in swimmable days when compared with the previous swimming season is largely due to lower summer rainfall. The four beaches with long term warnings removed are now swimmable more than 75% of the time. While this is a promising indicator there is still much work to be done.

Councillor Penny Hulse, Chair of the Environment and Community Committee advises:“We are working hard to identify issues to improve the water quality of Auckland’s harbours and waterways.

“Through monitoring and investigation programmes such as Safeswim and water quality improvement workstreams, we are now seeing progress as swimmability across the region increases.

“However, the issue is a complex one; we need to keep working hard on further improvements over time and I look forward to seeing even more progress in the next few years.”

Meanwhile, behind the scenes of Safeswim, Auckland Council is investigating an increased number of locations with water quality issues.

The Safe Networks programme, funded through the water quality targeted rate, is conducting investigations into these issues. So far in its first year, the programme, in collaboration with Watercare, has screened 215 outlets at 28 beaches and investigated 90Ha of catchment further inland from the outlets. The programme has inspected 794 private properties to identify issues with private assets in the stormwater and wastewater network. Issues that need to be fixed have been referred to the relevant operations teams and property owners.

The programme will continue to work through these issues before summer arrives, by which time Safeswim will have nine more digital signs in place at popular swimming beaches to help inform people on conditions at popular swimming spots. The wave of new signs will provide those without access to the internet and those regular beach users with information on constantly changing conditions; this is particularly helpful at beaches hosting swim events where all attendees have access to the latest conditions.

For more information go to safeswim.org.nz.